The behaviour of cells relies on extracellular stimuli and intracellular signalling responses. While in many cases intracellular compartments can be considered as sufficiently small to justify the assumption of a well intermixed system, there is many examples in which the intracellular spatial organization is essential for the cellular response. We are convinced that it is not only important to know that a specific molecule is expressed but also when and where. A good example for this is the immunological synapse, which is a spatially highly organized structure on the plasma membrane of two interacting cells.

In view of intracellular imaging technologies providing a firm data basis for the intracellular organization of organelles and molecules, this project aims at developing spatial multi-scale mathematical models for intracellular organelles like the endoplasmic reticulum, mitochondria, or vesicles/granules. This is complemented by cell interactions via immunological synapses or via gap-junctions in highly organized cell configurations.

Similar to synapses in the nervous system, immune cells form immunological synapses to interact with each other. However, immunological synapses are more complex in that they transiently connect motile cells on a time scale of minutes. Synapse formation between T cells and antigen presenting cells is key for T cell activation and involves adhesion molecules, T cell receptors and co-stimulatory molecules, which develop into a spatially highly organised bull-eye structure. The bull-eye is characterised by T cell receptors bound to peptide-MHC in the centre surrounded by adhesion molecules. In cooperation with Marc-Thilo Figge (Jena, Germany) we developed an agent-based model for the dynamics of the formation of immunological synapses.

The model was validated with data from the Mike Dustin lab (Oxford, UK) and the existence of an intracellular long-range interaction that is responsible for the assembly of T cell receptors was identified. We predicted the spatial structure in perturbed synapses. In cooperation with Mike Dustin (Oxford, UK) we are investigating the synapse in greater detail with the aim of uncovering principles of information processing in adaptive immune responses.

CTLA4 is an essential negative regulator of T cell immune responses. This receptor is constitutively presented by regulatory T cells and regulates the expression of co-stimulatory molecules on antigen presenting cells. Endocytosis of CTLA4 is continuous and rapid with subsequent recycling and degradation. Upon ligation with co-stimulatory molecules, CTLA4 can remove the ligands from opposing cells by a process termed trans-endocytosis.

In cooperation with Lucy Walker and David Sansom (UCL London, UK) we want to determine the impact of this cell-extrinsic mechanism on the regulation of T cell immune response. We propose a CTLA4 trafficking model and quantify synthesis, internalization, recycling, and degradation rates of CTLA4. We will develop hypothesis of how trans-endocytosis of CTLA4 ligands CD80/86 impacts onto the stimulatory potential of antigen presenting cells.

The coordination of signals between different cells is essential in many examples like endothelial cells or pancreatic β-cells in the islets of Langerhans. In healthy conditions, connected  β-cells respond to glucose stimulation with synchronous calcium oscillations, which are required for regulation of blood glucose deregulated in diabetic individuals. In cooperation with Richard Benninger (Denver, USA) we developed a model for β-cells  coupled by gap-junctions.

Currently, we want to determine the conditions of trans-cellular communication that guarantee organ functionality. Each cell is treated as a biological oscillator. Cells connected by delayed gap-junctions can be considered as coupled oscillators. They exhibit correlated oscillations, which are affected by many factors such as number of oscillators, coupling strength, delay, stochastic variation of oscillators, etc. We aim to investigate the impact of these factors on the synchrony level among the oscillators. The results of this generic investigation is applicable to a variety of different systems composed of coupled excitable cells. 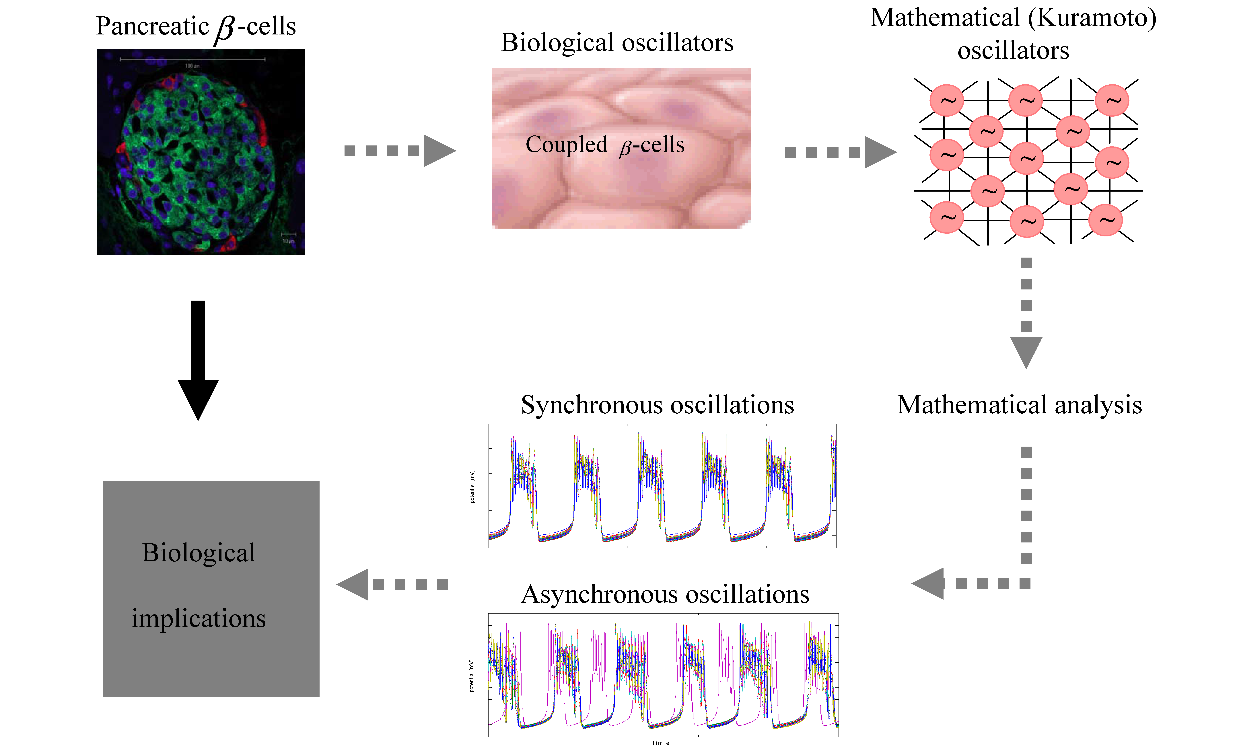 Spatio-temporal organization of the mitochondrial reticulum and quality control

A critical point of tip-to-side mitochondria fission/fusion rates was identified, at which the reticulum network switches between a fully disconnected and a fully connected network. There is evidence that cells at a resting state operate near this critical point such that they can quickly adapt the mitochondrial operation and structure to their actual needs at a low expenditure of energy.

Furthermore, the regular decomposition of the reticulum network as required during cell division allows for an optimized quality control: Small mitochondria fragments are more easily subject to autophagy if in a critical state. From this we hypothesized that reduced fusion/fission rates in the course of ageing would be a protective mechanism rather than an impaired functionality.

We are further investigating the impact of the cytoskeleton and mitochondria transport as well as radical oxygen species onto the spatial organization, flexibility, and quality control of the reticulum network. The results are essential for understanding ageing processes and pathologies. 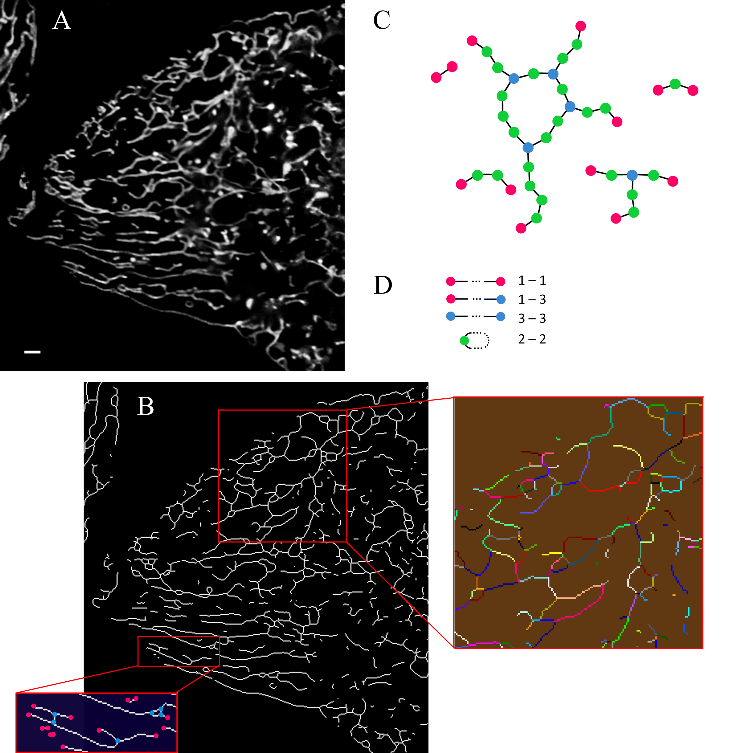 Insulin secretory granules are the most characteristic organelles of pancreatic β-cells. Much of our knowledge about β-cells comes from structure-function based approaches, relying on stereological techniques and electron microscopy. In cooperation with Michele Solimena (Dresden, Germany) we have combined a 3D in silico model with electron microscopy and high-content image analysis and shown that β-cells contain 5000-6000 granules. This is half of the reference value in the literature and has implications not only for our understanding of insulin secretion dynamics but also for the planning and dosage of therapeutic interventions.

A precise spatio-temporal knowledge of granules is critical for the control of β-cell insulin secretion. The intracellular origin of secreted granules is not known due to the limited penetration depth of evanescent waves of TIRF microscopy. In cooperation with Michele Solimena (Dresden, Germany), we achieved a 3D reconstruction of β-cell morphology, including an intracellular granule density distribution. From this, we derived a 3D model for the dynamics of insulin biosynthesis, transport and exocytosis. For 10 minutes after stimulation, the docked granules originate from the cell cortex and only later granules from the cytosol contribute. The model predicts that the observed stronger response of β-cells to subsequent glucose stimulation is due to de nuovo synthesis of the exocytotic machinery. This defines a new target for boosting the insulin response of diabetic β-cells. We now investigate the impact of the age of granules onto their exocytotic capacity.