HomeNews & EventsNewsTwo bugs with one stone

Two bugs with one stone

The development of new active substances against pathogenic bacteria, parasites, fungi and viruses is gaining importance, as established antiinfectives are becoming increasingly ineffective due to the development of resistance. At the Helmholtz Institute for Pharmaceutical Research Saarland (HIPS), a team led by Prof Rolf Müller has optimized an antimicrobial natural product that is active against infections with both, the hospital acquired MRSA pathogen and the malaria causing parasite, for preclinical research and future potential application in humans. The researchers have published their results in the journal Angewandte Chemie International Edition. 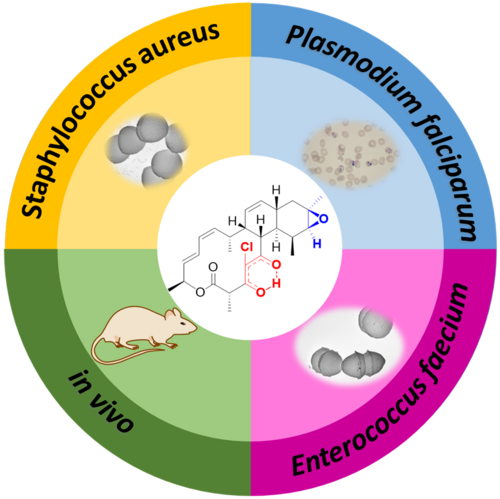 More and more cases of antibiotic-resistant bacterial pathogens are being reported worldwide. In order to ensure that effective antibiotics will still be available in the future, there is an urgent need to discover antimicrobial compounds with novel structures and mechanisms of action for the development of new drugs against infectious diseases. One of the most important sources of such novel drug scaffolds are natural products derived from microorganisms. These often highly potent substances are produced by bacteria or fungi to gain an advantage over competing microbes in their natural environment (e.g. the soil). However, before these molecules can be used to combat pathogenic bacteria in humans, they must be optimized for this application in usually lengthy processes to ensure sufficient efficacy and exclude side effects as far as possible. This is the task that Rolf Müller's team at HIPS has set itself for the natural product class of chlorotonils. HIPS is a site of the Helmholtz Centre for Infection Research (HZI) in collaboration with Saarland University.

Chlorotonils were described for the first time in 2007 from the soil bacterium Sorangium cellulosum. In addition to being highly effective against the malaria pathogen Plasmodium falciparum, chlorotonils also show very good activity against Gram-positive bacteria such as the hospital acquired pathogen Staphylococcus aureus - also known as MRSA. Despite the promising antimicrobial activity of chlorotonils, their use in the clinic was considered unlikely until recently because the known derivatives were not very stable and poorly soluble. The research team led by Rolf Müller therefore set itself the task of specifically improving these properties of the natural substance class in order to make the potent chlorotonils accessible for early preclinical development.

Although chlorotonil can be produced by chemical synthesis, the production of the natural product by this route is very time-consuming and cost-intensive, and yields are low. Rolf Müller's team found that the natural substance can be produced on a large scale by its natural producer S. cellulosum via fermentation. The scientists use the molecules isolated in this way as a starting point for the production of new derivatives that do not occur in nature. During so-called semisynthesis, the parts of the molecule that are responsible for the properties to be optimized, such as solubility and stability, were specifically modified. Dr Walter Hofer, first author of the study, says: "Natural products are very complex molecules and even small modifications can have a big effect. When optimizing via semisynthesis, the difficulty is to modify the substance in such a way that the negative properties are eliminated but the high efficacy is still maintained."

The good efficacy in the mouse model makes us confident that the new molecules could also be suitable for application in humans. However, to minimize the risk of unexpected side effects occurring here, further parameters need to be investigated beforehand.

After the successful synthesis of 25 chlorotonil derivatives and extensive in vitro studies, the scientists were able to identify a molecule with very good solubility that, in addition to good activity against P. falciparum, was also highly active against a number of multi-resistant bacteria. To prove that the newly developed molecule is also stable and active in living organisms, the drug candidate was tested in a mouse infection model with S. aureus. Here, administration of the improved chlorotonil derivative actually reduced the bacterial load of the infected animals up to ten thousand-fold more as compared to the initial derivative. Jennifer Herrmann, Head of Biology in the Department of Microbial Natural Products at HIPS, says: "The good efficacy in the mouse model makes us confident that the new molecules could also be suitable for application in humans. However, to minimize the risk of unexpected side effects occurring here, further parameters need to be investigated beforehand."

Another advantage of the newly developed derivatives is that in initial experiments investigating the development of resistance to the new active ingredient, the HIPS researchers were unable to observe resistance formation. This gives hope to the whole team that the active ingredient can be used for a longer time before resistant pathogens emerge in the clinical setting. "The development of resistance is usually not a question of if, but a question of when. If we can ensure that this process takes place more slowly, it will give us precious time in the fight against infectious diseases and potentially help us save lives," says Rolf Müller, executive director of HIPS and head of the Department of Microbial Natural Products at HIPS.

Follow-up studies will focus on exploring the pharmaceutical potential of this unique class of natural products and further optimizing them for use in humans. Current scientific questions deal in particular with possible delivery forms of the active substance and with how the substance can be transported into infected tissues. The overall goal is the development of an antibiotic that can be used for the treatment of severe infectious diseases for which there are hardly any or even no therapy options left for patients.