There is a continuing need for effective vaccinations against viruses which specifically infect the liver. According to the World Health Organization WHO, approximately 400 million people around the world are infected by hepatitis B or hepatitis C viruses and approximately 1.4 million people succumb to them each year. Moreover, chronic hepatitis B or C infections are amongst the most common causes of liver cancer and therefore are some of the most common reasons for a liver transplantation. Recently, a research team directed by Prof Dunja Bruder, who holds appointments at both the Helmholtz Centre for Infection Research (HZI) and the Otto von Guericke University Magdeburg, successfully targeted a vaccine specifically to recognition molecules of certain immune cells which allowed them to elicit an effective immune defence in the liver. The researchers published their results in Scientific Reports. 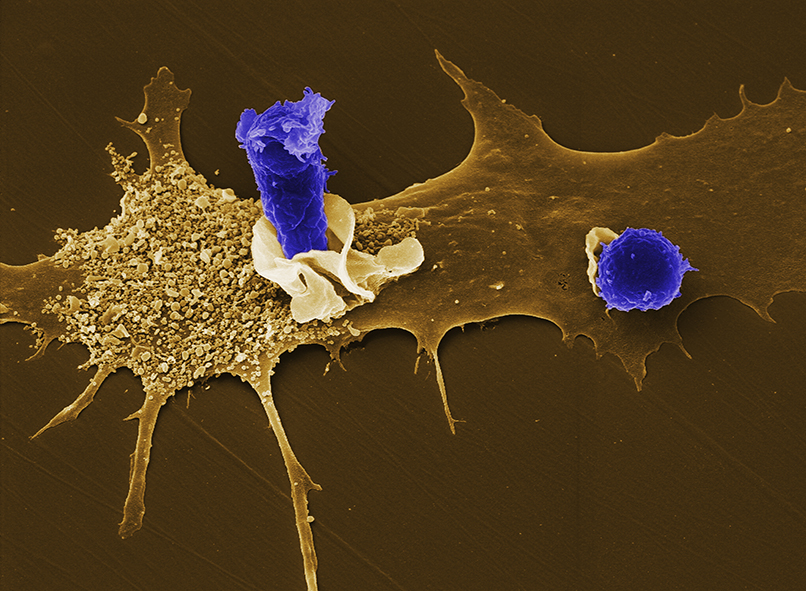 A human dendritic cell (yellow-brown) exchanges information with two T cells (blue). Image: HZI/Manfred Rohde.Similar to some other viruses, the hepatitis C virus specifically infects the liver and can cause a life-threatening chronic infection. Discovered in 1989, the virus thus far has managed to evade attempts at developing an effective vaccination. One of the underlying reasons is that the liver, as a detoxification organ, is a difficult environment for mounting an immune response: Under physiological conditions it is permanently exposed to potentially hazardous substances and it would cripple the immune system if the liver always triggered an alarm. This makes it easier for pathogens to permanently infect the liver. When viruses penetrate into the body, the immune system usually recognises them as foreign material. Dendritic cells – i.e. immune cells specialising on alerting the immune system to the presence of infections – possess various receptors for recognition of parts of the pathogens. The recognition of components of the pathogen then activates dendritic cells, which, in turn, present the pathogen components, so-called antigens, on their surface to other immune cells – so-called T cells. The T cells then initiate defence mechanisms against the pathogens. This is the same process that is elicited by a vaccination: Vaccines usually contain attenuated pathogens or just components of pathogens and therefore do not cause a disease. But the immune system is stimulated regardless, since the vaccine also contains adjuvants – i.e. vaccination boosters – which serve to specifically activate dendritic cells. The effectiveness of a vaccination can be increased even more if the antigens are coupled to molecules that are recognised particularly well by the receptors of the dendritic cells. By this pathway, the antigens are guided directly to the dendritic cells. However, it was not known yet if this method called "targeting" can also improve the immune defence against viruses in the liver.

"By targeting dendritic cells specifically in the scope of a vaccination, we managed to elicit a strong immune response against viruses in the liver," says Dr Julia Volckmar, who is a scientist in the "Immunoregulation" research group of Prof Dunja Bruder at the Helmholtz Centre for Infection Research (HZI). For this purpose, Volckmar administered an antigen to mice – either as such or coupled to molecules that bind to receptors on dendritic cells. All samples also contained some vaccination booster in order to activate the dendritic cells. The immune reactions of the mice were investigated after three cycles of vaccination: "The mice receiving the antigen coupled to a targeting molecule produced clearly more antibody and T cells against the antigen than the mice vaccinated with the uncoupled antigen," says Volckmar. As expected, the targeting of dendritic cells caused the immune response to be more effective.

Subsequently, the scientists infected the differentially immunised mice with viruses, which infect mainly the liver and were genetically changed such that they produced the vaccine antigen. Investigation of the liver showed an inflammation to be present in all immunised mice, which, in this case, is a good sign indicating that specific T cells were induced in the course of the vaccination, which then successfully identified and eliminated the infected liver cells. Moreover, the scientists tested blood samples and the liver of the mice for various clinical and immunological parameters indicating the intensity of the immune reaction. "We found clearly more active killer T cells in the liver of the mice, in which we specifically targeted the dendritic cells during the vaccination, which is indicative of a more intense defence reaction against the virus," says Julia Volckmar. Due to this strong activation of killer T cells in the liver, hardly any infected liver cells were still detectable. In contrast, the mice immunised by classical procedure, namely without targeting the antigen to the dendritic cells, were unable to successfully control the virus in the liver.

"This study was the first to show that vaccination with an antigen coupled to a targeting molecule for dendritic cells can elicit a specific and extremely effective immune response in the liver as well," the head of the research group, Dunja Bruder, said. This paves the way for an improved vaccination strategy in patients with viral liver infections. In addition, this vaccination approach may be interesting for the prevention of re-infection in patients, who had to undergo a liver transplantation because of a chronic viral liver infection and the ensuing complete loss of organ function. The study was performed in close cooperation with the "Vaccinology" department at the HZI directed by Prof Carlos A. Guzmán and scientists of the Otto von Guericke University Magdeburg, where Bruder is a professor for Infection Immunology. The research project was supported with funds from the Helmholtz Alliance "Immunotherapy of Cancers", because hepatitis B and hepatitis C infections are considered to be important risk factors for the development of liver cancer.

The Helmholtz Centre for Infection Research (HZI)
Scientists at the Helmholtz Centre for Infection Research in Braunschweig, Germany, are engaged in the study of different mechanisms of infection and of the body’s response to infection. Helping to improve the scientific community’s understanding of a given bacterium’s or virus’ pathogenicity is key to developing effective new treatments and vaccines. www.helmholtz-hzi.de/en