Though viruses are troublesome and often even hazardous pathogens, many of them remain well-hidden and cause only mild diseases or none at all. After some modification, these viruses can be utilized to protect the body from other pathogens. Researchers make use of their infectious properties by first eliminating the disease-causing components, then loading the harmless viruses with fragments of other, hazardous pathogens and introducing this construct into the body through a vaccination. By this means, the body is exposed and gets to know the molecules of the hazardous pathogens – the defence cells can establish an immunological memory. This means that basically harmless viruses can impart immune protection against deadly pathogens. When the body is exposed to the pathogen anew, the immune system recognises the molecules quickly and neutralises the pathogen before it can elicit a disease. 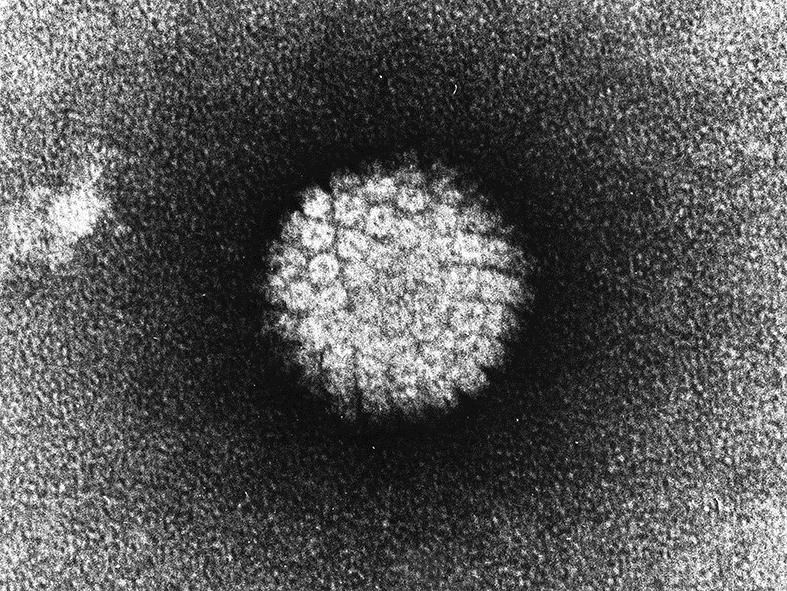 Image of a human papilloma virus by electron microscope.Scientists of the Helmholtz Centre for Infection Research (HZI) in Braunschweig recently discovered that the intensity of the immune response crucially depends on the site at which the fragments are introduced into the viral vehicle and defined optimal positions for this purpose. These insights are crucial for the optimisation of the use of viruses as vaccines and the development of basically harmless vaccines. The researchers published their results in PLOS Pathogens.

The Herpes viruses are a large family that includes more than 200 known members. Nine of these afflict humans specifically and usually remain inside the body for the rest of the person's life after the initial infection. One of these viruses is called cytomegalovirus (CMV), which is harboured by at least 40 per cent of all adults in Germany. Although it remains inactive most of the time, it can be activated by an immunodeficiency and can then cause damage to various organs. The virus triggers a very strong response of the immune system during which a large number of certain immune cells – so-called T-cells – directed against the virus are produced. The immune cells memorise certain components of the viruses in this process and recognise them during a subsequent infection such that they can quickly initiate an adequate defence reaction. Researchers can utilise these properties of CMV for the purpose of vaccinations: They incorporate gene fragments of other viruses into the genetic material of artificially attenuated cytomegalovirus and then introduce this construct into the body. Once in place, CMV triggers the translation of the incorporated gene fragment into proteins, which the body recognises as being foreign such that T-cells against these proteins are produced. In this process, short sections serve as recognition sequence and not all of these lead to a strong production of defence cells.

"It was not exactly known why some sequences of a protein trigger a strong immune response, while others do not," says Prof Luka Cicin-Sain, who directs the "Immune Aging and Chronic Infections" research group at the HZI. To solve this riddle, Cicin-Sain's team incorporated a recognition sequence from herpes simplex virus, which elicits labial herpes and other afflictions, at various sites of a cytomegalovirus and used this construct to infect mice. Subsequently, the scientists determined the strength of the immune response by the number of immune cells produced. "We found that the response of the immune system to a recognition sequence depends on the exact site in CMV at which the sequence is incorporated," says Cicin-Sain. In further investigations, the scientists were able to discover a reason for this phenomenon: If the sequence was incorporated at a certain position in CMV, the protein derived from it was processed in a particularly large number of body cells and was used for the production of specific defence cells.

All cells possess a protein recycling machinery that cuts proteins into smaller fragments and makes these available for the production of new proteins. In mice and humans alike, the body possesses two versions of this machinery, a universal one in all cells of the body, and a specialised one that is present in immune cells only. When pathogens penetrate into body cells, their proteins are also cut into small fragments by the recycling machinery. Then these short fragments serve as recognition sequences that are recognised by defence cells and can be used by these cells to memorise the pathogen. "We were able to show in our experiments that it matters if the incorporated sequence is processed by the recycling machinery of the immune cells or by the universal one" says Cicin-Sain. "If we introduce the pathogen sequences into a site that is processed by the universal recycler, this produces a much larger number of protein fragments in response to which the immune system can produce a much larger number of specific immune cells."

The scientists also tested if the reinforced defence reaction of the immune system might also improve the efficacy of vaccination using cervical cancer as their model: This tumour is elicited by human papilloma viruses for which an established vaccination is available already. The HZI researchers incorporated extremely short gene sections of human papilloma viruses at various sites of CMV and used these constructs to vaccinate mice. Several months after the vaccination they infected the mice with cervical cancer cells. Their previous results were confirmed: If the mice had been vaccinated with the CMV construct that allowed the largest number of defence cells to be produced, their immune system was capable of eliminating all tumour cells – i.e. the mice remained healthy. "The results show that CMV is well-suited for use as a vehicle in vaccinations and we also learned how to attain the optimal efficacy," says Luka Cicin-Sain. "This method has not yet been approved for clinical application in Europe, since we put safety first, and detailed studies are still needed to confirm that our vaccine approach cannot harm a person under any circumstances."