Treasure Hunt in the Bacterial Genome

A research project aimed at finding new medical compounds in bacteria has now been granted financial support from Brussels. The European Research Council (ERC) will fund the work of Dr. Andriy Luzhetskyy, a junior scientist investigating the genetics of Actinomycetes. This particular group of microorganisms produces a variety of important natural products which play a pivotal role in modern drug-based therapy of various diseases. With their help, Luzhetskyy intends to discover new potential drugs suitable for clinical use, e.g. as antibiotics. Over the next five years, he will receive a so-called “ERC Starting Grant” totalling 1.5 million Euro. Luzhetskyy heads a research group at the Helmholtz Institute for Pharmaceutical Research Saarland (HIPS), a branch of the Helmholtz Centre for Infection Research (HZI) in Braunschweig. 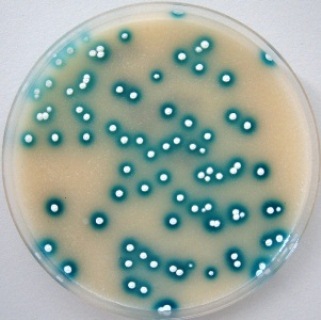 Expression of the gusA gene in Streptomyces Tü6071Actinomycetes produce and release an extraordinary wealth of chemical compounds. Some of these substances kill or inhibit other organisms – they presumably evolved to give the Actinomycetes an advantage in competing for food and habitat. Humans can also benefit from these effects, as antibiotics and antitumor drugs belong to the broad spectrum of Actinomycete metabolites.

Scientists have already identified several natural compounds from Actinomycetes, but not nearly all of them. Many “treasures”  are still hidden within the bacterial genome. “Actinomycetes have about 8000 genes”, Luzhetskyy explains, “The function of more than 3000 among them is still unknown.” One of the reasons is that whole complexes of genes “lie dormant” and are not active under normal laboratory conditions. In most cases it is still unknown how they are switched on and which substances they produce in an active state.

Luzhetskyy and his team intend to activate such genes in the microbial genome. They will develop genetic engineering methods especially for Actinomycetes and use them to switch on silent genes and effectively initiate metabolic pathways.

Luzhetskyy has five years to look for hidden natural compounds. “At the end, we want to establish a new technological platform which allows access to novel natural products”, says Luzhetskyy, “and we hope that new drugs will be developed based on these substances.”

The European Research Council (ERC) has been founded by the European Commission in order to encourage high quality research in Europe through competitive funding. ERC Starting Grants aim to support up-and-coming research leaders who are about to establish or consolidate a proper research team and to start independent research in Europe. The scheme targets promising researchers who have proven the potential of becoming independent research leaders.

The Helmholtz Centre for Infection Research contributes to the achievement of the goals of the Helmholtz Association of German Research Centres and to the successful implementation of the research strategy of the German Federal Government. The HZI focuses on the programme "Infection and Immunity". The goal of the programme is to solve the challenges in infection research and make a contribution to public health with new strategies for the prevention and therapy of infectious diseases.

The Helmholtz Institute for Pharmaceutical Research Saarland (HIPS) is a branch of the Helmholtz Centre for Infection Research (HZI) in Braunschweig and was founded together with the Saarland University in 2009. Where do new compounds against widespread infections come from, how can they be optimised for the application to humans and how are they delivered efficiently to the target site? The scientists at HIPS are searching for answers to these questions by deploying highly modern methods of pharmaceutical sciences.