HomeNews & EventsNewsStaying a step ahead of the game

Staying a step ahead of the game

Trypanosoma brucei, which causes sleeping sickness, evades the immune system by repeatedly altering the structure of its surface coat. An international research team, including Dr Emmanuel Saliba from the Helmholtz Institute for RNA-based Infection Research (HIRI) in Würzburg, has now sequenced the complete genome of the parasite and studied its 3D genome architecture. By that, the researchers have revealed crucial molecular aspects of the pathogen’s molecular strategy. The new findings appear in the leading science journal Nature. The HIRI is a location of the Helmholtz Centre for Infection Research (HZI) in cooperation with the Julius-Maximilians-Universität Würzburg.

Trypanosomes with differently stained surface proteins. © LMU/MüllerUnicellular parasites belonging to the genus Trypanosoma cause sleeping sickness in humans. Sleeping sickness is a debilitating and potentially lethal disease in Sub-Saharan Africa, which is transmitted by the tsetse fly. Prof Nicolai Siegel, who heads a research group in molecular parasitology at the Ludwig-Maximilians-Universität München (LMU), uses trypanosomes as an experimental model system to study the incessant arms race between parasites and their hosts: As the host immune system evolves ways of fighting parasitic infections, parasites continually develop strategies to outwit these mechanisms. Trypanosomes are specialists in the art of immune evasion. In a process known as antigenic variation, they constantly alter the structures of their surface coats, forcing the host’s immune system to redirect its fire against a novel target. Siegel’s group, in cooperation with colleagues based at the universities of Würzburg, ZB MED – Information Center for Life Sciences, TH Köln, the HIRI in Würzburg and institutions in the US, UK and Israel, have now taken a closer look at the genetic mechanisms that underlie the parasite’s ability to alter the proteins displayed on its surface. The researchers demonstrate that DNA packaging proteins, which are involved in regulating access to specific segments of the parasite’s genome, play a central role in the process.

Trypanosomes infect a range of vertebrate organisms, and are usually transmitted to the final host by biting insects, which inject them into the mammalian bloodstream. The new study focuses on Trypanosoma brucei, which is not only responsible for sleeping sickness but also causes a condition known as nagana in cattle.

The T. brucei genome contains approximately 2000 genes that encode distinct variants of its surface coat protein. Crucially, only one of these is expressed on a given cell at any given time, and it covers the entire surface of the pathogen. Adaptive immune responses require the molecular recognition of invasive pathogens. Thus, the immune reaction initially mounted by the host during an infection is directed against the variant currently exposed on the surface of the trypanosome. However, by switching off the gene for the expressed surface protein and activating another instead, the parasite can effectively evade the host’s immune defense. Since it takes time for the immune system to recognise a new coat protein as non-self, the parasite is always one step ahead of the game, and can therefore establish a long-term infection. 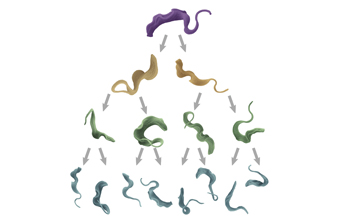 Electron microscope image of trypanosomes. The pseudo-color image illustrates different antigens on the cell surface. © LMU/Fischer/Wedel“Our main interest is in how this genetic variability is regulated,” says Siegel, whose laboratory is part of the Faculty of Veterinary Medicine and currently located in LMU’s Biomedical Center. In the nucleus of the parasite, the chromosomal DNA molecules are wrapped around bead-like complexes made up of proteins called histones. In its condensed state – collectively referred to as heterochromatin – most of the DNA is inaccessible to enzymes and is therefore inactive. Accessibility to activation is largely controlled by attaching or removing small chemical tags to individual histone proteins or by replacing them with variant forms. To work out how the genes for surface proteins are selectively activated in trypanosomes, Siegel and colleagues first sequenced the entire genome of T. brucei and determined the three-dimensional configuration of the DNA within the nucleus. By analysing the transcriptomes of single cells, they were able to show that switching from one form of the surface coat to another is stimulated by removal of two such histone variants. This results in a change in the three-dimensional structure of the DNA and an accompanying alteration of the overall packing density at these sites. These effects together make new gene sequences accessible to activation and enable new interactions between DNA segments to take place, which in turn allow other genes to be activated. “The important point is that both histone variants must be removed,” says Siegel. “When we removed only one of them, the three-dimensional structure of the DNA was altered, but there was no switch in the surface protein expressed.”

“For the first time, we have been able to solve the transcriptome of a single trypanosome and could see the unique coating identity of each pathogen," says Saliba. A better understanding of the mechanisms responsible for antigenic variation in trypanosomes promises to shed light on diseases other than sleeping sickness. Many other pathogens – including the causative organism of malaria, fungi of the genus Candida and many bacteria – use similar strategies to neutralise immune responses.