Pathogenic bacteria are becoming resistant to common antibiotics to an ever increasing degree. One of the most difficult germs is Pseudomonas aeruginosa, a pathogen that elicits serious infections in humans and is resistant to a range of antibiotics. Researchers are therefore actively looking for targets for alternative agents that attenuate the bacteria. Pseudomonads can survive in so-called biofilms, which are dense constructs in which the individual bacteria are protected from the immune system and medications. In order to be able to produce a biofilm, the bacteria first have to communicate with each other by means of chemical signals. Scientists from the Helmholtz Centre for Infection Research (HZI) in Braunschweig determined the three-dimensional structure of a protein that is involved in the production of the signaling molecules. Based on this structure, it is now possible to model perfectly fitting inhibitory substances that interrupt the signaling pathway to render the bacteria "mute". The scientists published their results in the international journal ChemBioChem. 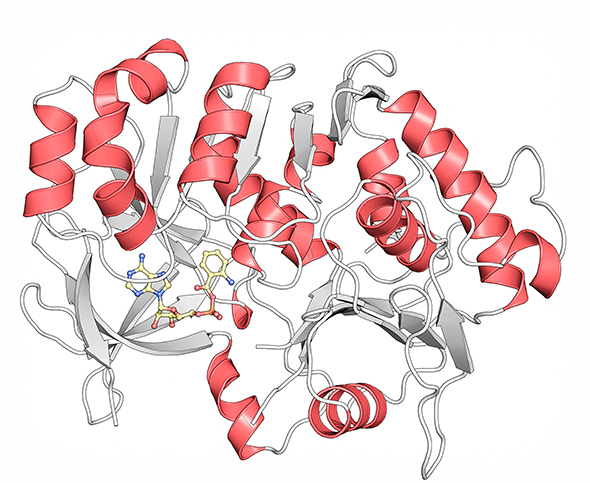 Crystal structure of the protein PqsA in complex with the intermediate Anthraniloyl-AMP (yellow), that is processed by PqsA. © HZI / Manfred RohdeIn a way, bacteria do talk to each other. They do not communicate by words, but rather by chemical signals. This allows them, for example, to coordinate the penetration into a host or their proliferation. This special type of communication is called "quorum sensing". The term, "quorum", originates from the time of the Roman Empire and corresponds to the smallest number of Senate members needed to win a vote. Pseudomonads use this system to trigger the production of biofilms, whereby the individual bacteria release signaling molecules and measure how many of their kind are in their vicinity at any given time. Once a threshold is exceeded, they commence their attack. After the pseudomonads have aggregated into a biofilm, they are very difficult to eradicate – by the immune system or by medications alike, because even antibiotics are often ineffective against pathogens in biofilms. However, the bacterial communication system that contributes to the production of biofilm offers a suitable point of attack for alternative agents: These substances can suppress the communication, effectively making the bacteria remain accessible to the immune system and to antibiotics.

"Conventional antibiotics attack vital processes of the bacteria, which kills the bacteria and generates a selection pressure that forces the bacteria to develop resistance to the antibiotics," says Florian Witzgall, who is a doctoral student at the "Structure and Function of Proteins" department of the HZI directed by Prof Wulf Blankenfeldt.

"But if an agent only attacks the communication of the bacteria, they stay alive and are only rendered harmless. Presumably, there is a lower pressure to develop resistance."

Bacteria utilise different systems to communicate with each other. Pseudomonas aeruginosa possesses three different communication systems, one of which is specific for this pathogen and is called pqs system (an acronym of Pseudomonas quinolone signal). Approximately ten percent of all genes of Pseudomonas aeruginosa are regulated by intercellular communication and this includes many genes that the bacteria need for infection of a host. "The pqs system is an expedient target for medications, since it is fairly specific for Pseudomonas, it regulates a multitude of processes such as the production of virulence factors or biofilms, and there is no homologous system in humans," says Witzgall. The function of the pqs system is already known in much detail: In multiple steps, a number of proteins produce a signal molecule through which the bacteria communicate with each other and that regulates a multitude of genes, including the infection programme of Pseudomonas, through the activation of a DNA-binding receptor. 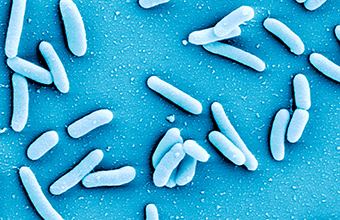 Pseudomonas aeruginosa bacteria (left) often develop resistance to antibiotics and seek protection from external influences in biofilms. © HZI / RohdeThe HZI researchers recently looked at the first protein of this production chain and deciphered its three-dimensional structure. They used harmless Escherichia coli bacteria to produce the protein – called PqsA – in the laboratory and then isolated, purified and crystallised the protein. Especially the production of crystals is a protracted process, in the course of which the scientists tested more than 1000 different conditions to get to the desired result. Subsequently, they exposed these protein crystals to X-rays and recorded the diffraction patterns. They calculated the three-dimensional molecular structure of the protein from thousands of diffraction images. In all, the entire process took eight months to complete.

"Based on the elucidated structure, we now know where and how the PqsA protein binds to the starting substance for the later signal molecule," says Wulf Blankenfeldt. "This allows us to specifically design artificial molecules on the computer that firmly bind to PqsA and cannot detach again. This would block its function such that no signal molecules could be produced any longer." The result: The bacteria, lacking the signal molecule, would no longer be able to sense each other – they would basically be deaf and mute. The development of a molecule of this kind is now a task for active-substance research that can be based closely on the results of the structural biologists from the HZI.