The Pseudomonas aeruginosa bacterium is a widespread and dangerous hospital germ. It infects the respiratory tract and lungs and possesses natural resistance to numerous antibiotics. There is a search for so-called pathoblockers ongoing to be able to combat the bacterium better in the future. The focus here is not on killing the pathogen, as would be the case with antibiotic treatment, but rather on specifically eliminating or ameliorating its pathogenic effect. In an infection with Pseudomonas aeruginosa, the blue-green metabolic product pyocyanin, amongst other factors, contributes to the emergence of inflammatory processes and has a tissue-damaging effect. The infection would be less severe if the production of this substance could be prevented by means of a pathoblocker. In order to do this though, the exact molecular mechanisms responsible for the production of pyocyanin within the bacterial cell must first be understood. The research team led by Prof Wulf Blankenfeldt, who is the head of the "Structure and Function of Proteins" department at the Helmholtz Centre for Infection Research (HZI) in Braunschweig, recently discovered more details of the interplay of proteins that is required for production of pyocyanin applying modern protein biochemical analysis methods. In the course of this work, he has been able to clarify the central function of a protein called PqsE as a "moonlighter” in this process. The study is published in the current issue of Nature Communications.

Professor Blankenfeldt, where can one get infected with Pseudomonas aeruginosa and who is at a particular risk?
Wulf Blankenfeldt: You can get infected with this widespread bacterial pathogen almost anywhere. It likes moist environments - and there are quite a few places where it can be present: for example, in soil or water in the outdoors. But it also feels quite at home in tap water, washbasins, dishwashers, showers or toilets, any place at which it is easy to get infected if hygiene measures are less than 100 per cent perfect. And it is also transmissible from one person to another. For people with a weakened immune system or serious respiratory diseases such as cystic fibrosis or chronic obstructive pulmonary disease (COPD), an infection can turn out to be very dangerous and sometimes even life-threatening. Unfortunately, Pseudomonas aeruginosa has also made a name for itself as a hospital germ.

Why are many antibiotics ineffective against this germ?
Pseudomonas aeruginosa can selectively expel foreign substances such as drugs from the inside of its cell and is one of the bacteria that form a so-called biofilm. These bacteria surround themselves with a type of mucous layer that offers them some degree of protection - for instance against antibiotics. This makes Pseudomonas aeruginosa naturally resistant to a large number of antibiotics and therefore difficult to combat. The development of effective pathoblockers that could curb or eliminate the pathogen's clout would indeed be a boon here.

It would be beneficial to switch off the tissue-damaging metabolic product pyocyanin, which is produced by the pathogen. What role do the proteins investigated in your study play in this?
Pyocyanin is produced only after the genes required for its production are read. And this reading process is controlled by an interplay of different proteins. At the core of this is a protein called RhlR for short. It has been known for a while that RhlR only starts gene reading when the signal molecule C4-HSL gives the go-ahead and binds to RhlR. But whether and, above all, how other proteins might be involved in this signalling cascade was not properly understood until now.

But you already had a suspect in your sights… 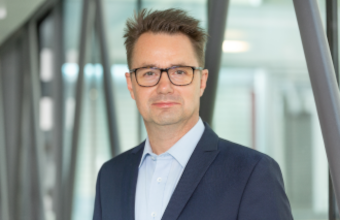 Wulf Blankenfeldt (©HZI/Verena Meier)(laughs) Exactly - even a long-term suspect! Some 20 years ago, my team and I started working on a protein called PqsE, which was thought to be associated with the production of pyocyanin. At that time, we were able to elucidate its crystal structure, among other things. And then, about five years ago, we obtained the first evidence in laboratory studies that the intrinsically rather unstable protein RhlR is stabilised by binding to PqsE. Since then, it was obvious to me that PqsE might also be directly involved in the activation of the pyocyanin genes - but I could not prove it, yet.

Now you succeeded as your recent study in Nature Communications shows!
Yes, finally! Through the help of highly sophisticated computer-assisted methods that were developed only recently. This would not have been possible in the past. We used software from Israel to design an artificial RhlR protein on the computer that should be stable by itself and still retain its full function in gene reading. We then had the DNA blueprint to have it produced by a company and subsequently examined the artificial protein in our lab. In our study, we tested whether the stabilised, synthetic RhlR is able to start gene reading for the production of pyocyanin even in the absence of PqsE. And lo and behold: That was exactly the case! On the other hand, in comparative experiments, the natural RhlR was unable to read the genes in the absence of PqsE, and no pyocyanin was produced. We were thus able to show that a stable RhlR is required for the reading process - and that the PqsE protein is responsible for this by associating with RhlR to form a complex.

Graphical summary of the results: PqsE stabilises the protein RhlR and causes reading of the genes for pyocyanin. ©Blankenfeldt/HZIHowever, PqsE had previously led you and your international research colleagues up the garden path...
Yes, that's right! PqsE had been classified in the group of so-called thioesterases on the basis of its properties as an enzyme, which are proteins that accelerate (bio)chemical processes. Therefore, it was presumed that its activities as an enzyme would also come into play in some way with regard to pyocyanin. But the stabilising effect that PqsE exerts on RhlR has nothing at all to do with its activity as an enzyme. PqsE has actually been leading us up the garden path for quite a long time. But fortunately we have now been able to officially report its moonlighting as a stabiliser of RhlR - and may even be able to stop it in future.

Where do you go from here - will the proteins of Pseudomonas aeruginosa continue to keep you occupied?
Definitely. They haven't let me go for twenty years, and I guess there will be many more years to come - and it's getting really exciting now. With modern methods like protein crystallography, we were able to visualise the RhlR-PqsE protein complex in 3D in our study. This is an excellent basis for searching, together with our colleagues at the HZI, for active substances that specifically interfere with this interaction and could be used as pathoblockers. We are already working on a screening procedure and hope that our future research will continue contributing to the identification of novel therapeutic approaches that can be successfully applied in Pseudomonas infections.