Necrotising fasciitis (NF) is the most severe form of tissue death caused by bacteria. The bacterium Streptococcus pyogenes is one of the main causes of this disease. The infections take a rapid course and are associated with devastating consequences for the afflicted individuals ranging from severe necrosis to toxic shock. The disease is often fatal. However, if detected at an early stage, it can be cured by treatment with medication and removal of the afflicted tissue. Scientists from the Helmholtz Centre for Infection Research (HZI) recently discovered the crucial role and protective effect of pathogen-specific antibodies in the first stage of the Streptococcus infection. Accordingly, early clinical application of a cocktail of human immunoglobulin G containing such specific antibodies might prevent the manifestation of tissue necrosis and the progress of the disease. The study was completed in cooperation with clinicians from the University hospitals in Bergen (Norway), Gothenburg and Stockholm (Sweden) and Copenhagen (Denmark) and was recently published in the Journal of Infectious Diseases.

Streptococcus pyogenes is the most common cause of necrotizing fasciitis. © HZI / Manfred RohdeStreptococcus pyogenes is a very wide-spread Streptococcus species known to be the pathogen eliciting bacterial angina, which is also known as tonsillitis. Scarlet fever and middle ear infections can also be caused by this bacterium. Pathogens of the species Streptococcus pyogenes are also called "flesh-eating bacteria" since they can invade the subcutaneous tissue and the fascias - the soft tissue components of the connective tissue - where they can cause immense destruction. Their points of entry into the body differ - a cut, sometimes even a puncture by a thorn or a bite by an insect are sufficient. Necrotising fasciitis in seffected individuals initially may be manifested as strong local pain and fever followed by swelling of the afflicted regions, which ultimately may lead to necrosis of entire skin areas. This is where the name of the disease originated. The dramatic consequences, unclear etiology, rapid progress and complicated diagnosis of this life-threatening infectious disease make new research in this field so important.

"There are various bacterial species that can elicit this rapid type of tissue necrosis," says Prof Dietmar Pieper, who is a microbiologist and the head of the "Microbial Interactions and Processes" research group at the HZI, which contributed to the study. "Streptococcus pyogenes is one of the most frequent causes. According to estimates of the Robert-Koch-Institute, up to 20 percent of the general population are host to this bacterium without displaying any symptoms of disease. However, in rare cases it can cause severe infections or necrotising fasciitis." This infectious disease can be cured if it is detected in due time and treated with medication. Currently, the main therapeutic approaches are antibiotics to control the infection and hyperbaric oxygen therapy - i.e. the supply of oxygen at elevated ambient pressure aiming to reinforce the immune response and to kill the bacteria. In addition, surgeons need to remove the dead and damaged tissue to allow the wounds to heal. In the absence of treatment, the disease would rapidly progress to septic shock and multi-organ failure. 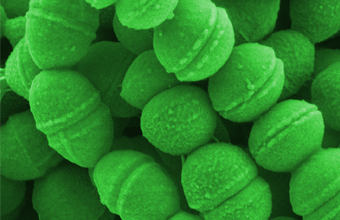 © HZI/Manfred RohdeStreptococcus pyogenes. © HZI / Manfred RohdeUntil now, it was not clear to researchers why necrotising fasciitis (NF) with tissue necrosis develops in some patients but not in others. "The development of NF is characterised by a complex interplay between immune system of the host and the pathogen, which produces a multitude of virulence factors in order to bypass or manipulate the immune response," says Dr Andreas Itzek, who is a scientist in Dietmar Pieper's team and the principal investigator of the study. "These virulence factors include the exotoxins of Streptococcus pyogenes - i.e. specific toxic substances that are released by the bacterium."

All patients with NF were shown to be deficient in specific antibodies against the Streptococcus pyogenes pathogen and the majority of its exotoxins during the initial phase of the infection.

The HZI researchers recently elucidated the role of pathogen-specific antibodies and, specifically, of antibodies that can neutralise the exotoxins of S. pyogenes, in the development of necrotising fasciitis. For this purpose, they investigated plasma samples and bacterial isolates from patients suffering from this infection and compared them to samples from patients with a non-necrotising soft tissue infection caused by Streptococcus pyogenes.

"All patients with NF were shown to be deficient in specific antibodies against the Streptococcus pyogenes pathogen and the majority of its exotoxins during the initial phase of the infection. This shows a previously overlooked state of serologic susceptibility in patients with NF during the earliest stages of the infection that is potentially linked to disease progression" Andreas Itzek says. A pre-existing antibody titer against the exotoxins released by S. pyogenes might prevent the irreversible progression of tissue infections into a severely spreading necrotising fasciitis.

"One of the most important insights from the study for future therapy is that the clinical application of intravenous immunoglobulin G in the early phase of the infection can compensate for the detected antibody deficiency," Dietmar Pieper says. However, if the immunoglobulin G therapy takes place too late and tissue necrosis is progressing, the disintegration of tissue cannot be hindered by this treatment.