German scientists from the Helmholtz Centre for Infection Research (HZI) and the German Center for Infection Research (DZIF) in Braunschweig and Nigerian researchers are applying the new mobile information system for the first time to combat a monkeypox outbreak in Nigeria. The monkeypox epidemic has spread since September 2017 and, by now, afflicts 128 patients in 14 federal states in Nigeria. The name of the system, SORMAS, stands for "Surveillance, Outbreak Response Management and Analysis System". It captures and analyses data upon the outbreak of dangerous infectious diseases, recognises potential hazards and manages necessary control measures at an early point in time. In line with the technological status of West African countries, the system is based mainly on mobile tablets or phones. It allows laboratories and hospitals to network with each other and to exchange epidemiological data in real-time.

The SORMAS app in use. © HZI / MelchingJohanna Wanka, German Federal Minister of Research, said: "The dramatic experience of the Ebola epidemic in West Africa has made it very clear that the national and international emergency planning for epidemics of this type was insufficient. SORMAS shows, in an exemplary manner, how German research contributes to solutions for the global health challenges of our times. We need these rapid-response epidemic management systems in order to be able to combat the spread of hazardous pathogens throughout the world more rapidly and to be able to prevent possible pandemics."

The development of SORMAS is funded by the German Federal Ministry for Education and Research, the German Society for International Cooperation (GIZ) and the German Center for Infection Research.

"SORMAS works even in remote places without a mobile phone network. As soon as there is an intermittent network connection, the data are synchronised centrally. This allows the epidemic protection measures to be directed with little time delay,"

Prof. Gérard Krause, Head of the Department Epidemiology and the SORMAS project at the HZI and coordinator of the "Translational Infrastructure Epidemiology" within DZIF

"The system perfectly meets the urgent pandemic prevention needs in Africa and shows that actions can be initiated rapidly and efficiently through the use of digital solutions in an effort to prevent pandemics from spreading," adds Hans-Joachim Fuchtel, who is the parliamentary state secretary of the Federal Minister for Economic Cooperation and Development.

The monkeypox epidemic has spread to ten federal states in Nigeria since September 2017. More than 100 people are now afflicted by this disease. The monkeypox virus is related to the eradicated poxvirus. In earlier epidemics in Africa, approximately 3 % of the afflicted individuals succumbed to the disease. The outbreaks are often triggered by contact with animals – but the virus is also transmitted between humans. Researchers assume that the risk of contracting monkeypox may be on the rise since the smallpox vaccinations were discontinued in the 1970s. 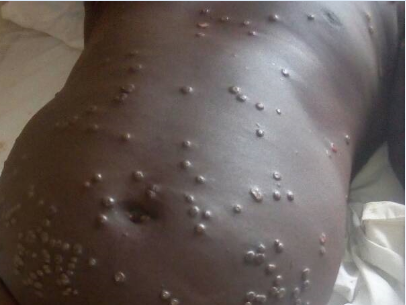 Patient with monkeypox at the abdomen. © Nigerian Centre for Disease ControlIn most African countries, disease monitoring is not set up for early detection of the outbreak of such an uncommon disease. "We are not even sure at this time if we are dealing with a local outbreak of related cases or with a diffuse general increase of the phenomenon," says Dr Chikwe Ihekweazu, who is the director of the Nigerian Centre for Disease Control. Therefore, he asked the Helmholtz Centre for Infection Research to use SORMAS to investigate the current situation. Shortly thereafter, a team from Germany travelled to Nigeria to install SORMAS at the Incident Command Centre of the Centre for Disease Control and in the laboratories of the respective federal states.

The current use of SORMAS in Nigeria is very promising: the system improved the data situation significantly within just a few days. For example, SORMAS uses network diagrams to show transmission pathways and automatically displays the geographic distribution on maps. The director of the Nigerian Centre for Disease Control, Dr Ihekweazu, is convinced of the added value provided by the system and hopes to soon be able to use SORMAS nationwide and permanently in Nigeria. "We would like to use SORMAS during the imminent meningitis season, because we urgently need to improve the data situation." In addition, nine other diseases with a high epidemic potential in Nigeria will also be covered, including Lassa fever, measles and cholera.

Prof Dirk Heinz, who is the Scientific Director of the Helmholtz Centre for Infection Research in Braunschweig and Board Member of the German Center for Infection Research underlines: "We are very glad to see our research and development work produce a direct practical benefit so soon. SORMAS will unfold its full potential in terms of prevention once it can be established nationwide in multiple countries."