Sugars are highly important molecules for all life. They convey vital signals, and thus participate in manifold biological processes (e.g. determination of blood-types and the formation of bacterial biofilms). Sugars are often recognized by specialized proteins called lectins. Researchers at the Helmholtz Institute for Pharmaceutical Research Saarland (HIPS), a branch of the Helmholtz Centre for Infection Research (HZI), recently identified a novel lectin in the bacterium Photorhabdus luminescens. This lectin is highly selective for so-called "α-gal" sugars, which are produced on the cells of pigs and New World monkeys. Pig cells are often used for tissue grafts from pigs to humans, in which the transplanted pig cells need to be modified by genetic engineering in order to prevent a vigorous immune response to the α-gal (also called xenoantigen) normally found on pig cells. The newly discovered lectin may be used as a diagnostic tool and for quality control in the future. The researchers published their results in the Journal of Biological Chemistry.

Flourescein—tagged Lectins a new probe for detecting sugars in pig cells. © Beshir et al. 2017Sugar-binding proteins called lectins are widespread in all domains of life and used as virulence factors in numerous bacteria, e.g. in Pseudomonas aeruginosa. Lectins make it easier for the microorganisms to adhere to the host for the purpose of infection. This motivated Dr Alexander Titz, who is the head of the "Chemical Biology of Carbohydrates" junior research group of the Helmholtz Centre for Infection Research (HZI) and of the German Center for Infection Research (DZIF)who is the head of the "Chemical Biology of Carbohydrates" young researcher group at the HIPS, to compare lectins from different bacteria: "We wanted to find out if there are additional lectins in other types of bacteria that show high specificity forcertain sugars." His research group scoured sequence databases in the search for new lectins and found one  in the bacterium Photorhabdus luminescens that piqued their interest.

Photorhabdus bacteria lead a symbiotic life in nematodes and infest larger organisms. "The Photorhabdus lectin surprisingly showed a very high specificity for the sugar structure α-gal that occurs in pigs and New World monkeys," says Alexander Titz. "After this discovery, we wanted to know exactly how this works."

Light was shed on this question through a collaboration with Dr Jesko Köhnke, who is the head of the "Structural Biology of Biosynthetic Enzymes" young investigator group at the HIPS. "We elucidated the crystal structure of the new lectin - bound to different sugars - in order to understand the binding properties of the molecule," says Köhnke.

The findings of the two research groups, which was driven by blue-sky research, has now serendipitously led to a clinical application as a diagnostic tool. The special sugar α-gal recognised by the Photorhabdus lectin plays an important role in organ transplantations of foreign tissues into humans. 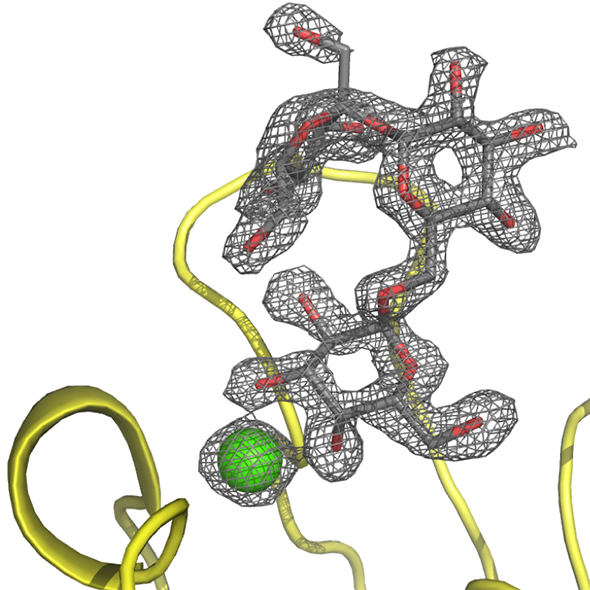 PIIA complexed with the raffinose carbohydrate. © Beshr et al. 2017Due to the lack of human organ donors, it is quite common to transplant tissues from pigs, for example heart valves. Pig cells usually have α-gal on their surface. This is recognised by the human immune system and leads to vigorous defence reactions of the human body in the form of acute organ/cell rejection. Modern genetic engineering methods have been used to produce pig cells that are void of α-gal on their surface. But the success of these methods must be closely monitored: The Photorhabdus lectin may be used for quality control in this context in order to make sure that no α-gal is present. Until now, a lectin from seeds of an African plant called Griffonia simplicifolia was used for this purpose, the isolation of which is a complicated process. In contrast, the newly described lectin is comparatively easy and inexpensive to produce and has been tested successfully for these purposes by the research group of Prof Eckhard Wolf at the Veterinary Faculty of the Ludwig-Maximilians-University in Munich.

The HIPS researchers also do not rule out a broader use of the diagnostic tool for α-galactosylated sugars. "The ABO blood group system of humans is also defined by sugars. Here, the Photorhabdus lectin might be used as a new typing system," says Titz.