Multi-resistant gram-negative bacteria are particularly difficult to control with antibiotics. An agent must first penetrate through a double-hulled cell wall to be able to have an effect. In addition, some infections are difficult to diagnose because they are located deeply inside the body. A promising strategy for the detection and control of these infections is to use molecular probes with theranostic properties: They allow for simultaneous diagnosis and therapy of the infection at an early stage. Researchers from the Helmholtz Centre for Infection Research (HZI) and the German Center for Infection Research (DZIF) recently developed molecular probes that utilise the iron transport system of bacteria to transport antibacterial agents into the bacterial cell. These "molecular Trojan horses" can also carry fluorescence markers and thus make infections in smaller animals visible and amenable to treatment. The antibacterial properties of the molecular probes are to be improved even further in future studies, and their applicability for the molecular imaging of infections in larger animals up to the size of humans is to be developed as well. The researchers published their results in the journal Angewandte Chemie International Edition.

Animal model for the diagnosis of bacterial infections: The two mice on the left side are infected with Pseudomonas aeruginosa; fluorescent-labelled siderophore conjugates visualise the bacteria in the living organism. Image: HZI / Bushra RaisSome pathogenic bacteria cause infections that are a serious health risk. Due to the ever increasing international mobility, this infection risk will continue to rise in the future. In addition, modern medical treatments that penetrate through biological barriers of the body and weaken the immune system are a serious problem. Another reason for concern is the fact that the fraction of multi-resistant pathogens is increasing, while the number of approved new antibiotics has decreased.

Multi-resistant gram-negative bacteria including Escherichia coli and Pseudomonas aeruginosa are particularly difficult to control. They possess two cell membranes that make it more difficult for a potential agent to reach its destination and to exert its effect in the target location. Accordingly, the requirements for candidate agents are significantly more complex than is the case with gram-positive bacteria, which possess only a single cell membrane.

"There is a lack of efficient methods for safe diagnosis of infections that are difficult to access and cannot be reached, e.g., by biopsies. This includes infections on implants or endocarditis, which is an inflammation of the heart's inner membrane," says Prof Mark Brönstrup. "To be able to see these infections at early stages, non-invasive imaging methods using molecular probes are very promising, since they might allow for rapid treatment even before the infection becomes manifest in the form of biofilms or spreads throughout the body." Brönstrup heads the "Chemical Biology" department of the HZI and holds a DZIF professorship.

A whole arsenal of transporters allows the bacteria to scavenge not only those siderophores their own cells produce, but also siderophores from other cells, to cover their iron needs even in times of crisis. "This is a great opportunity for us to design artificial agents, which the bacterial cell will take up readily. Our strategy is reminiscent of the Trojan horse: We can easily append an antibiotic effector to artificial agent complexes and secretly transport the effector into the bacterial cell, where it can exert its antibacterial effect," says Brönstrup.

The molecular probe developed by the HZI researchers is based on a siderophore conjugate to which they can append functional units. "Our probes are so-called biomimetics. We use them to successfully mimic biological substances from nature. The framework of our probe is very flexible and versatile and can be used for multiple modes of chemical synthesis," says Kevin Ferreira, who is a scientist in the team of Mark Brönstrup and the principal author of the study. "The probes can transport both a metal ion and an antibiotic agent into a gram-negative bacterial cell. 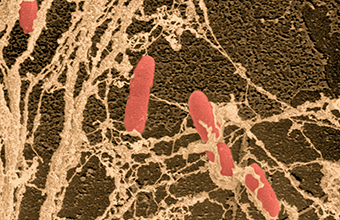 Pseudomonas aeruginosa. © HZI / Köckritz-Blickwede, M. RohdeThe newly developed method allows the HZI researchers to visualise infections in vitro or, through imaging methods, in larger and smaller animals. For example they studied Pseudomonas aeruginosa-infected mice to monitor bacterial infections in vivo. The bacterial infection was made visible on a microscopic scale by means of a fluorescence label. The functional principle works very well in small animals, such as mice. This allowed the researchers to obtain a first proof of the feasibility of the in vivo imaging of bacterial infections by siderophore targeting. The HZI researchers have already filed for a patent covering the functional principle of the newly developed model probe.

Future studies are aimed to further improve the antibacterial properties of the conjugates through the incorporation of highly potent effector molecules in subsequent generations. In addition, future studies will focus on analogues with metal-bound cores that are suitable for molecular imaging of infections in larger animals up to the size of humans.