Interaction Between Immune System and Brain

Interferons are important messenger molecules in the immune system, assisting in the fight against pathogens such as influenza viruses and probably also SARS-CoV-2. However, interferon might also be involved in immune-brain interactions unrelated to an infection and may have an influence on learning ability. This is indicated by a study with mice from the Technische Universität Braunschweig, which is published today in the scientific journal Cell Reports. The Helmholtz Centre for Infection Research in Braunschweig and TWINCORE in Hannover are also involved in the study. 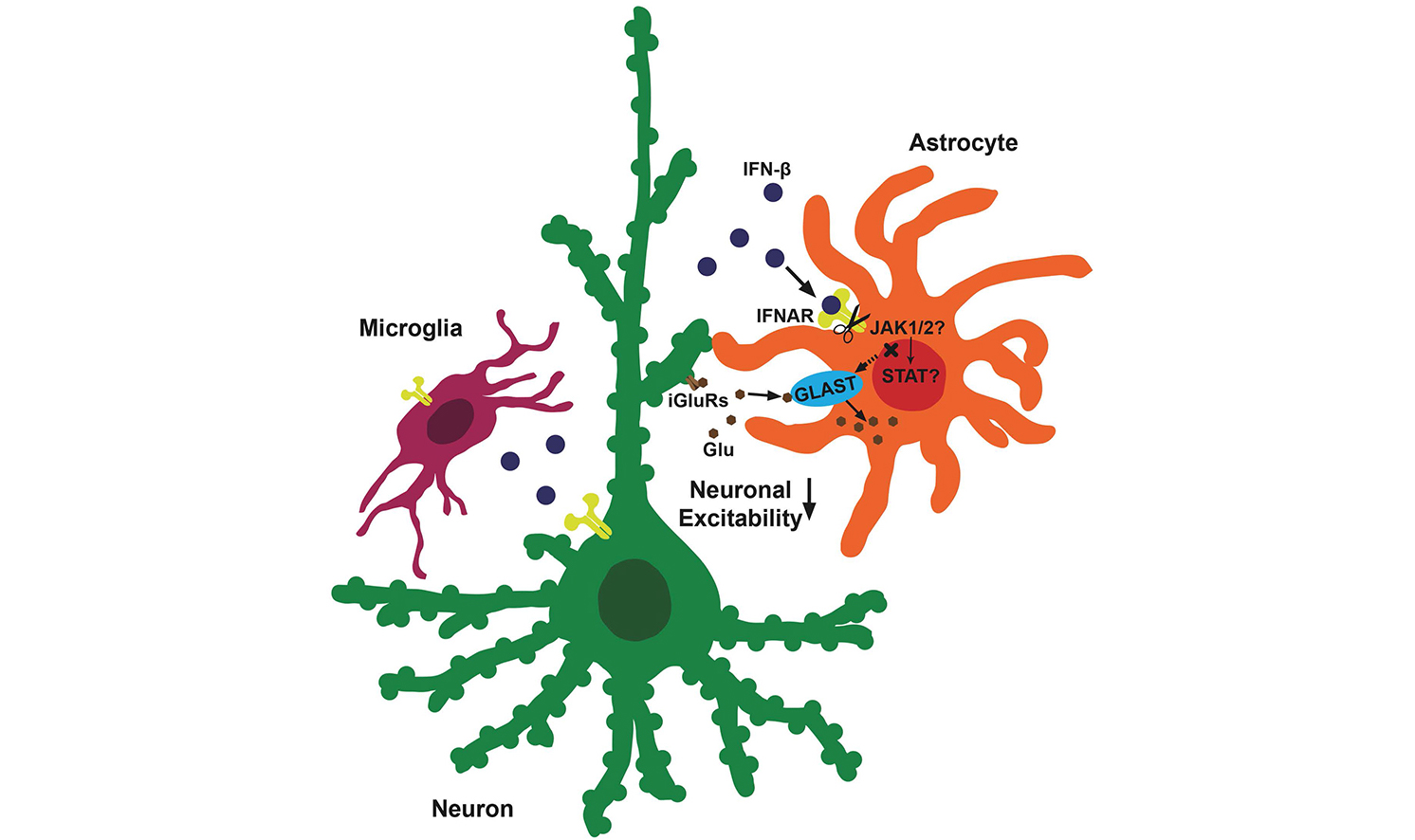 © Martin Korte/TU BraunschweigThe astrocytes pump the glutamate away so that the next impulse can have a new effect on the receptors of the neuron. © Martin Korte/TU Braunschweig In an earlier study, the researchers from Braunschweig already showed that the reaction of the immune system during an illness with an influenza virus can have a long-term negative effect on the brain. “We know that in the case of illness there are signalling systems that act from the immune system to the nervous system and vice versa. Above all, these have negative consequences for both organ systems of the body. We have now investigated whether the signalling systems also act on the nervous system in the absence of infection and whether these interactions can also have positive effects, for example on our learning ability,” says Professor Martin Korte, neurobiologist at the Institute of Zoology at TU Braunschweig.

The reasearchers focused on type I interferon, an antiviral messenger that is predominantly found in the blood after viral infections. However, interferons can also be produved in the brain and, apart from their antiviral effect, can also play a role in autoimmune diseases. Studies have shown that small amounts of type I interferon are also released when no infection is present. This is where the research team comes in: In order to find out more about how interferon interacts with the brain and how it affects it, Dr. Shirin Hosseini from the Department of Cellular Neurobiology at TU Braunschweig examined the brain structures and the learning and memory abilities of mice in which no receptors for interferon were present in their nerve and glial cells.

Professor Ulrich Kalinke and his research group at the Helmholtz Centre for Infection Research (HZI) and TWINCORE in Hannover have bred so-called knockout mice for this purpose, in which the receptors for interferon type I were blocked or via genetic engineering missing. Using brain slices from these mice, the researchers at TU Braunschweig examined the hippocampus, the brain region responsible for spatial navigation, biographical memories and memory for facts. They also looked at the animals’ memory. For example, the rodents had to find a platform hidden under water with the help of signs after a few training sessions. “We found that it has negative effects on the physiology of the brain, especially on learning processes, when the interferon receptor on astrocytes, a type of glial cell, is missing,” Dr. Shirin Hosseini summarizes the results. “After the mice learned where the platform was in the water in the experiment, they reached it again within a few seconds. Without the interferon receptors on astrocytes, it took them much longer.” 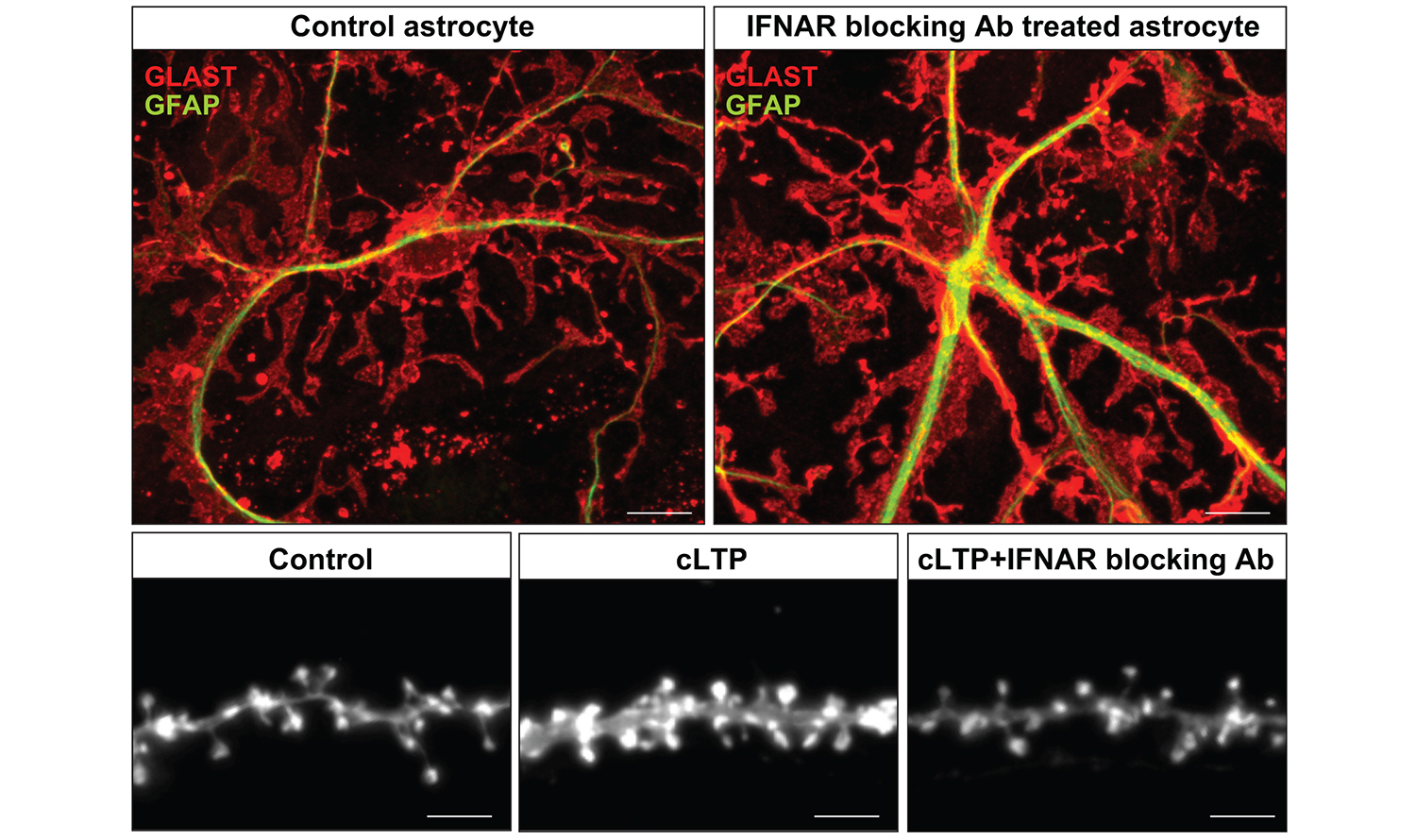 Astrocytes with (left) and without (right) interferon receptor signaling in the microscope image: If the interferon receptor signaling is missing, a significant increase of the glutamate transporter GLAST (red) is visible. © Shirin Hosseini/TU Braunschweig But how does the interferon affect the mice’s learning and memory? In the hippocampus, memory processes lead to the release of the neurotransmitter glutamate, a messenger substance that transfers excitation from one nerve cell to another. The astrocytes pump the glutamate away so that the next impulse can have a new effect on the receptors. The researchers used mouse models to find out that the interferon receptor on the astrocytes is important in influencing the removal of glutamate. Interferon type I determines how quickly the glutamate is removed. If, for example, it is pumped off at a slower rate, it has a longer and therefore stronger effect. As a result, learning events can manifest themselves better. If the interferon receptors are missing, the regulation of glutamate removal is also missing and memory processes are out of balance.

High specificity of the results

The study by the team led by Professor Korte and Dr. Hosseini confirms that the immune system influences the nervous system and especially the ability to learn, even outside of an infection. “What is special about our results is the high specificity with which we can describe the molecular interaction between the immune system and the brain. We can tell exactly which receptor at which synapses modulates learning events,” says Korte. The results of the study contribute to the research focus “Infection and Therapeutics” at the TU Braunschweig. Based on this, further research will be conducted, as Korte reveals: “Our study shows that molecules of the immune system are used in the brain and are even good for memory processes in physiological, or only slightly elevated concentrations. This raises the question of whether vaccination, with a slight stimulation of the immune system, could also promote the brain’s performance, whereas a severe infection can permanently weaken the brain. That’s what we want to study next.”

200 mice were involved in the examinations. All mice were examined at the same age in order to establish a basis for comparison. The animals were bred at the Helmholtz Centre for Infection Research (HZI) and TWINCORE Hannover. The animal experiments took place at the TU Braunschweig and at the HZI. The study was carried out under strict safety and animal protection conditions and was financially supported by the Helmholtz Association and the German Research Foundation (DFG).