Numerous pathogens are capable of becoming resistant to medications, such as antibiotics, which allows them to protect themselves from the antibiotics and to spread vigorously. Moreover, many diseases cannot be treated sufficiently because there are no effective drugs available. The search for new drugs is very laborious and resource-consuming. Natural products, so-called secondary metabolites, that are produced by bacteria, fungi and plants are some interesting candidates in this context. Especially soil-dwelling myxobacteria produce a large variety of natural agents which they use to eliminate microbial competitors or enemies. This is the special field of natural product researcher Prof Rolf Müller. Honouring his outstanding research aimed at the discovery of microbial natural products mainly from myxobacteria, the German pharmacist has been awarded this year's Inhoffen Award, to be presented on 17 May. Müller directs the Helmholtz Institute for Pharmaceutical Research Saarland (HIPS), a branch site of the Helmholtz Centre for Infection Research (HZI) and the Saarland University.

"Rolf Müller is one of the most well-known natural product researchers in Europe. His work on microbial drugs has been pioneering basic research. In addition, his work is a highly valuable contribution for future applications, specifically for the therapy of infectious diseases," said Prof Axel Brakhage from the Leibniz-Institute for Natural Product Research and Infection Biology (HKI) in Jena and the Friedrich-Schiller-Universität Jena in his laudatory speech.

Rolf Müller majored in pharmacy at the University of Bonn, where he completed his doctorate in 1994 and received his license to practice pharmacy. He then went on to work as a scientist at the University of Washington in Seattle, USA, at the German Research Centre for Biotechnology (GBF) and at the Technische Universität Braunschweig. Müller has been a professor of Pharmaceutical Biotechnology at the Saarland University since 2003. His research focuses on biologically active substances from microorganisms, specifically from myxobacteria. The natural products obtained from them are an excellent source of lead substances for the development of therapeutics in the pharmaceutical industry.

Rolf Müller has been the Executive Director of the Helmholtz Institute for Pharmaceutical Research Saarland (HIPS) since 2009. He is the director of the "Microbial Natural Products" department and also a co-founder of PharmBioTec GmbH and MyBiotech GmbH in Saarbrücken. He coordinates the "Novel Antibiotics" research area in the scope of the German Center for Infection Research (DZIF).

Müller has been awarded the PHOENIX Pharmacy Science Award no less than three times for his research (2001, 2007, 2015). He also received the DECHEMA Junior Scientist Award for natural product research (2002), the BioFuture Award of the German Ministry for Education and Research (2003) as well as the DECHEMA Award of the Max-Buchner Research Foundation (2010) and was awarded the David Gottlieb Memorial Lecture of the University of Illinois (2016). In 2012, Rolf Müller was elected a member of the National Academy of Science and Engineering (acatech). He has been a member of the National Academy of Sciences Leopoldina since 2016

Receiving the Inhoffen Medal in Braunschweig has a very personal meaning to Rolf Müller. In 1998, he started a young investigator group at the former German Research Centre for Biotechnology (GBF) in Braunschweig, the predecessor of today's Helmholtz Centre for Infection Research (HZI), and completed his qualification as a university lecturer at the Technische Universität Braunschweig in 2000. "Looking at the previous awardees, this is a very prestigious prize and I would like to express my gratitude in the name of my research group, the large number of long-standing employees and cooperation partners, who made our interdisciplinary work possible," Müller said. 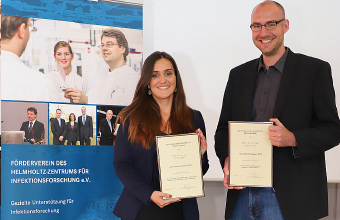 To commemorate the chemist Prof Hans Herloff Inhoffen (deceased in 1992), the Technische Universität Braunschweig, the HZI (formerly: German Research Centre for Biotechnology (Gesellschaft für Biotechnologische Forschung or GBF)) and the Friends of the HZI annually organise the Inhoffen Lecture (since 1994) at which the award bearing his name is presented. Inhoffen taught at the Technische Universität Braunschweig from 1946 to 1974 and served as its Rector from 1948 to 1950. Moreover, in 1965, he founded the "Institute for Molecular Biology, Biochemistry and Biophysics" (IMB), the predecessor institution of the GBF and, by extension, of the Helmholtz Centre for Infection Research.