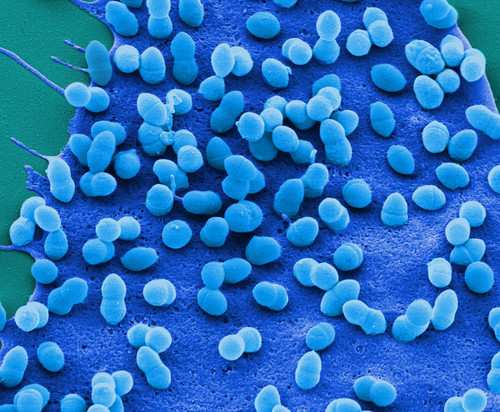 Bacteria of the species Streptococcus pneumoniae colonising an endothelial cell. Image: HZI/M. RohdeA body infected by the influenza virus is particularly susceptible to other pathogens. Bacteria like Streptococcus pneumoniae, i.e. the pathogen causing pneumonia, find it easy to attack an influenza-modulated immune system and to spread widely. This can even be fatal in some cases. The reasons for the bacterial growth in the presence of a coinfection by influenza virus and bacteria is still debatable. In the scope of an interdisciplinary project, researchers of the Helmholtz Centre for Infection Research (HZI) in Braunschweig and of the Otto von Guericke University Magdeburg (OVGU) just discovered that the overproduction of a certain messenger may facilitate the proliferation of the bacteria in the presence of coinfection. The results of the researchers are published in the journal Scientific Reports.

Up to 20,000 people succumb to the consequences of an influenza disease each year in Germany alone. However, in most cases it is not the influenza virus that leads to serious complications, but a second infection by bacteria acquired by the patient after the onset of influenza. Streptococcus pneumoniae is a bacterium that can cause severe pneumonia and often attacks the body when it is weakened by influenza. In combination with influenza, this bacterial infection takes a particularly severe course and becomes life-threatening. The processes, by means of which influenza affects the susceptibility to and the severity of bacterial infections, was not well understood thus far.

Using an interdisciplinary approach, the research teams of Dunja Bruder, who is the head of the HZI's research group "Immune Regulation", and a professor of infection immunology at the OVGU Magdeburg, and Dr Esteban A. Hernandez-Vargas, who directs the "Systems Medicine of Infectious Diseases" research group at the HZI, just made a major contribution to solving this riddle. The researchers jointly developed a project plan linking laboratory work with mice, which were infected concurrently with the influenza virus and Streptococcus pneumoniae, and computer-based modelling of the infection processes. "Usually we simulate biological processes based on previously published data. Since we, as systems biologists at the HZI, work very closely with the infection researchers on-site, we were able to plan the infection experiments appropriately such that the collected data would be ideally suited for the mathematical modelling of the infection processes," says Esteban Hernandez-Vargas. Dunja Bruder and her team were able to show in infection experiments that the number of macrophages – immune cells that eliminate pathogens – drops rapidly as early as 18 hours after coinfection of influenza-infected mice with the bacteria, and that the bacteria proliferate very rapidly.

When the systems biologists modelled the observed increase of the pneumococci and the simultaneous decrease of the immune cells through mathematical functions, they discovered that the two processes do not match exactly. "This allowed us to deduce that the strong proliferation of the bacteria was not only due to the decrease in the number of macrophages. There had to be at least one more factor that played a role in this process," says Dunja Bruder.

The scientists then took a look at the release of various messenger substances that have important functions in the defence of bacterial infections. As before, exact time points for the collection of samples were defined in the investigation of these molecules to make sure that the collected data would allow for the best-possible mathematical simulation of the ongoing processes. The scientists noted that the amounts of the messenger substances produced by the body in the presence of a coinfection were clearly larger than in the presence of a bacterial infection alone. Hernandez-Vargas’ team again entered the profiles of the numbers of bacteria, numbers of macrophages and the various messenger substances in his mathematical models. The best model was obtained with the measured interferon gamma data – another messenger substance – and a minor influence was also detected for interleukin 6 – both of which are molecules that are usually important for control of the immune defence in an infection.

"Due to the infection by the influenza viruses, the interferon gamma level is already high. Even more interferon gamma is produced if a second infection by pneumococci occurs. Based on our results, we are presuming that the macrophages can no longer effectively eliminate the bacteria because of this overreaction of the immune system. It is known that their "elimination function" is impaired by excessive levels of interferon gamma," explains Bruder. This observation is also confirmed by a computer simulation: If one withdraws the interferon gamma from the model, bacterial outgrowth may not be presented. The research team of Dunja Bruder now plans to test the results of this simulation in laboratory experiments. "If the experimental results are consistent with the results obtained by modelling, the mathematical model would give us a tool that allows us to predict the role of certain messenger substances in infection processes," says Hernandez-Vargas. "As one of the benefits, laboratory experiments could be planned much better and the number of animal experiments could be reduced. Moreover, in the long term it might be possible to develop a therapy for coinfections that focuses on the interferon."