HZI coordinates the development of a nasal vaccination against Chagas disease

With their project Vaccine for Prevention and Treatment of Trypanosoma cruzi Infection (CRUZIVAX), a consortium of eleven partners coordinated by the Helmholtz Centre for Infection Research has been awarded funding through the European Commission’s Horizon 2020 work programme. The aim of this project is to develop a highly effective, low-cost and easy to administer prophylactic vaccine candidate for Chagas disease, which is caused by the parasite Trypanosoma cruzi (T. cruzi). The vaccine is to be applied as a nasal spray. The project is coordinated by the Vaccinology department of the Helmholtz Centre for Infection Research (HZI) in Braunschweig under the direction of Prof Carlos A. Guzmán. The total funding amounts to more than eight million euros over a period of five years, about two million euros being provided to the HZI.

The parasite Trypanosoma cruzi (T. cruzi) causes Chagas' disease. © CDC-Dr. Myron G. SchultzChagas disease, also known as American Trypanosomiasis, is a chronic parasitic disease caused by the flagellated protozoan Trypanosoma cruzi. It is a vector-borne disease, but the parasite can also be transmitted by congenital route, blood transfusions and organ transplantation or by ingesting contaminated food. It is recognised by the World Health Organization (WHO) as a neglected tropical infectious disease in Latin America where about 10,000,000 individuals are infected (56,000 new infections per year). Further estimates are that Chagas disease is responsible for 10,600 deaths per year. In chronically infected individuals heart or gastro enteric manifestations can develop that can lead to death. Chagas disease is currently endemic to 21 Latin-American countries and has also become a global concern as a result of globalization and mass migration of chronically infected individuals. Thus, Chagas disease is now reported in 19 non-endemic areas including the European Union, United States, Canada, Japan and Australia (e.g. 120,000 and 1,200,000 infected people are living in Europe and the United States, respectively).

„Despite the apparent modest number of annual deaths, Chagas disease has both a devastating effect on the quality of life of patients – more than 30 per cent develop severe cardiac or gastrointestinal complications – and a tremendous economic impact with costs around 7.2 billion dollars per year,” says Carlos A. Guzmán. 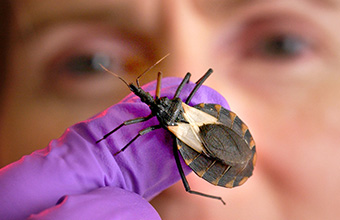 Chagas disease is often transmitted via the feces of the kissing bug. © CDC-James GathanyThe project CRUZIVAX will use Traspain, a chimeric polyvalent T. cruzi antigen previously engineered by the consortium partners, as basis for the new vaccine. It will be adjuvanted with cyclic-di-AMP, which has been developed at the HZI and has proven efficacy in diverse preclinical models. In addition to further preclinical studies in different animal models, as well as toxicology studies, the development pipeline will also include a clinical phase 1 trial bridging the gap between preclinical and early clinical development and thus remove a major roadblock in Chagas disease. Also within the framework of the project, the efficacy of the vaccine, combined with Benznidazole, will be tested in preclinical therapeutic settings.

© European MissionThis project has received funding from the European Union’s Horizon 2020 research and innovation programme under grant agreement No 815418.

Centre for the Evaluation of Vaccination – University of Antwerpen (CEV), Antwerpen, Belgien