How immune cells are armed

The immune system protects the human body against pathogens thus keeping it healthy. To achieve this, however, immune cells must be able to recognise intruders and to classify them as dangerous or harmless. These tasks are shared among different cell types: If an immune cell recognises foreign matter, it can present it to another immune cell. Both cells form a characteristic ring-shaped structure at their contact point, the immunological synapse, through which they exchange information. If all the components of the synapse are correctly positioned, activation of the immune cell will result. Researchers of the Helmholtz Centre for Infection Research (HZI) and the Braunschweig Integrated Centre of Systems Biology (BRICS), in collaboration with researchers at the University of Oxford (UK), have now simulated the dynamic arrangement of these components using computer models and have subsequently been able to make inferences on the mechanisms involved in the formation of synapses. Today, the researchers have published their results in the scientific journal Cell Reports. BRICS is a joint institution of the HZI and the Technische Universität Braunschweig.

T-cells (red) and B-cells (blue) form immunological synapses at their contact point (green). © HZI/ Marco van HamThe human immune system is a finely-balanced defense mechanism protecting the body against pathogens. Different immune cells are therefore constantly in search of foreign molecules indicating the presence of any pathogen which needs to be destroyed. If one of these cells meets a foreign body, it will integrate parts from it – called antigens – onto its own cell surface and present these to other immune cells: the T-cells. This cell type is responsible for classifying the presented parts as dangerous or harmless and, if necessary, initiating a response against them. To do this, T-cells make contact with the antigen-presenting immune cells and read information from their surface. Both cells form a ring-shaped structure made of different proteins at the point of contact between the cells – termed immunological synapse – over which they can exchange information. At the end of this process the T-cell is either activated or remains inactive.

The T-cell makes contact with the antigen-presenting cell by means of specialized adhesion molecules which initially are randomly distributed over the cell surface. The loose bond formed between the two cell surfaces allows for the binding of T-cell receptors to the presented antigen. “The decision whether the T-cell is activated or not depends on the number and affinity of antigen molecules recognised. The formation of a completely structured synapse at the contact surface influences this activation”, says Anastasios Siokis, researcher of the HZI department “Systems Immunology” of Prof. Michael Meyer-Hermann located at the BRICS. Where immunological synapses are correctly formed, the receptor molecules are concentrated around a central point whereas the other surface proteins arrange themselves into two rings around this central area. 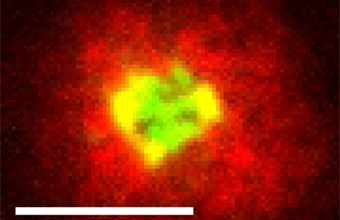 Microscope image shows an immunological synapse. © Philippos DemetriouIt is not yet fully understood how the different molecules reach their place in the synapse. “We wanted to investigate how immunological synapses are formed”, says Anastasios Siokis. “So far, experimental data could only show that the antigen receptors of the T-cell are transported by the cell scaffold protein, actin, to the synaptic center. This, however, could not be proved for the other molecules.” During a project (RGP0033/2015) coordinated by Meyer-Hermann and funded by the Human Frontier Science Program (HFSP), the BRICS researchers used data from laboratory experiments carried out by cooperation partners of the University of Oxford (Great Britain) in the laboratory of Michael L. Dustin to simulate the formation of synapses using computer models. In these models, they simulated different conditions and influencing factors and were able to demonstrate that the different molecules exert an influence on each other in terms of their arrangement although they do not interact directly. 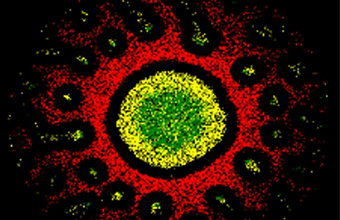 Computer simulation of an immunological synapse with its characteristic ring-shaped structure. © HZI/ Anastasios Siokis“One of the reasons for this is the size of the cell surface molecules: The antigen receptors are small and are repelled by the large adhesion molecules. They organise themselves in small clusters which are transported by actin in the direction of the centre of the synapse. There, they block the space for the other surface molecules”, says Siokis. “Another molecule that is necessary for T-cell activation is similarly small and forms a ring around the receptors in the centre. The large adhesion molecules accumulate around them in an outer ring. The ring pattern is thus a result of mechanical forces in the cell membrane which sorts the molecules in the synapse according to their size.” The computer simulations show, however, that the molecules of the two outer rings become mixed when no additional force is applied, though this fact contradicted the experimental data. “Comparative model calculations showed that small surface proteins could only fully reach the inner ring of the synapse when under the influence of actin”, says Philippe Robert, also a scientist working in the “Systems Immunology” department. “Our results suggest that antigen receptors as well as the other molecules involved are bound to actin but each with different binding strengths.”

From a medical point of view, these results are of particular significance for the area of treatment of defective T-cell activity. “A knowledge of the underlying mechanisms at work in the formation of a functional immunological synapse allows the identification of potential target molecules for medicines”, says Michael Meyer-Hermann. In this way, activation of T-cells may be induced or slowed down, which could be used for improved management of acute or chronic infections, improved results from vaccination or prevention of autoimmune diseases.