HomeNews & EventsNewsHospital germs have their flaws too

Hospital germs have their flaws too

The hospital germ Pseudomonas aeruginosa can cause serious wound as well as lung and urinary tract infections, especially in weakened individuals. Pseudomonas manages time and again to survive attacks of the immune system and antibiotic therapies. One key to the success of this persistent pathogen is its complex communication system as the bacteria use various signalling substances to communicate with each other and to control infection processes. Scientists from the Helmholtz Centre for Infection Research (HZI) in Braunschweig and the Helmholtz Institute for Pharmaceutical Research Saarland (HIPS) in Saarbrücken recently discovered how these bacteria produce a large part of the variety of signalling molecules: The ability of a single protein complex to change its shape allows the bacteria to process molecules of different sizes into signalling substances. If it is possible to develop an inhibitor for this complex, one could “freeze” its motion and interrupt the communication of the bacteria. The scientists published their results in ChemBioChem.

3D model of the PqsBC protein complex with its binding channel (blue). The detail enlargement shows that the channel has an optimal length for binding a fatty acid chain of eight carbon atoms. © HZI/Florian WitzgallThe pathogen Pseudomonas aeruginosa (P. aeruginosa) uses a variety of tricks to perfectly adapt to its environment. Pseudomonas bacteria can colonise and proliferate in virtually any environment, including the lungs, eyes, urinary tract, an open wound or an implant. They even manage to survive most antibiotics by shielding themselves in a dense biofilm or by simply pumping the toxins from their interior with the help of small pumps. The bacteria communicate with each other when they select the effective survival strategies to be used. For this purpose, they release a variety of signalling molecules, which trigger the respective reaction of the bacteria when a certain threshold (“quorum”) is exceeded. This type of communication is called “quorum sensing” – and as if this wasn't enough, P. aeruginosa possesses no less than three different interconnected systems for this purpose. 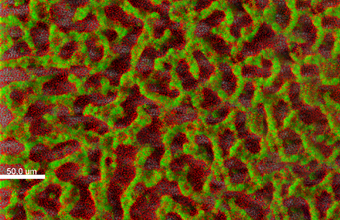 The hospital pathogen, Pseudomonas aeruginosa, utilises dense biofilms to protect itself from antibiotics and attacks of the immune system (green = viable Pseudomonas cells; red = dead cells). © TWINCORE/Janne ThömingThe bacteria's adaptability makes the treatment of P. aeruginosa particularly difficult. For this reason, scientists throughout the world are searching for properties that are specific to these bacteria and can be used as points of attack of novel medications. One very promising target is one of the communication systems – the so-called pqs system (Pseudomonas quinolone signal), which is present as such only in P. aeruginosa. It has been known for a long time that this system works with a broad range of signalling molecules, but it was not known in detail how the diversity of these molecules arises. “We've known for a number of years that a complex made up of proteins called PqsB and PqsC is responsible for the diversity of signals of Pseudomonas aeruginosa,” says Prof Wulf Blankenfeldt, who is the head of the “Structure and Function of Proteins” department at the HZI. “Here, PqsB serves as a stabiliser, whereas PqsC carries out the chemical reaction: It produces molecules that have similar structures, but differ in the length of their fatty acids chains, although the exact molecular details of this were previously unknown.”

In order to take a look behind the curtains of this versatile protein complex, Florian Witzgall, who is a doctoral student in Blankenfeldt's department, carefully purified the protein complex and then crystallised it and determined the three-dimensional structure of PqsBC using x-ray diffraction analysis. He showed “that the PqsBC complex forms a type of channel that is open at times and is closed at other times,” Witzgall says. He was also able to identify different intermediate states and to derive that the regions of the protein complex surrounding the binding side of the fatty acid chains are the mobile part of the protein complex. “We presume that PqsBC opens up its channel, takes up a fatty acid chain in it, closes the channel, and then transfers the fatty acid to the second substrate of PqsBC. Then the channel opens up again and releases the finished signalling molecule,” Witzgall says.

If we manage to freeze the mobility of PqsBC with an agent, we would be able to specifically inhibit PqsBC and disrupt the communication of P. aeruginosa.

Wulf Blankenfeldt, head of the department “Structure and Function of Proteins" at the HZI

The three-dimensional structure of the protein complex also demonstrates that the length of the channel is such that it is filled up by a fatty acid chain consisting of eight carbon atoms. “Accordingly, this should be the preferred length that is processed by the complex,” Witzgall says. Further experiments in collaboration with the “Chemical Biology” department of Prof Mark Brönstrup at the HZI confirmed this hypothesis: A quantitative analysis of the converted fatty acids showed that chains made up of eight carbon atoms are incorporated most frequently. “This result illustrates the fine-tuning of the pqs system, since the signalling molecule with this carbon chain is the one that is best recognised by the receptor of the pqs system of the bacteria,” says Florian Witzgall. Likewise, Dr Martin Empting of the “Drug Design and Optimization” department and Prof Rolf Müller's “Microbial Natural Products” department at the Helmholtz Institute for Pharmaceutical Research Saarland (HIPS), a branch site of the HZI run in cooperation with the Saarland University, confirmed that fatty acids consisting of eight carbon atoms are preferred by PqsBC. The large diversity of the signalling substances presumably relates to the fact that both shorter and longer fatty acids fit into the channel and can be processed, albeit less efficiently.

“There has been evidence for a while of increased flexibility in related proteins. PqsBC is the first example for this protein family, in which the mobility has in fact been demonstrated by different crystal structures,” Florian Witzgall says. The new insights into the mobility of PqsBC might open up a new target site for novel medications. “If we manage to freeze the mobility of PqsBC with an agent, we would be able to specifically inhibit PqsBC and disrupt the communication of P. aeruginosa,” Wulf Blankenfeldt says.

Video showing the mobility of PqsBC

PqsBC exists in different conformational states. Computer simulations can be used to derive a dynamic mechanism from these states, in which PqsBC can bind to the fatty acid chain by closing the molecule.
www.youtube.com/watch?v=45NnxkE3qlw