When a foreign substance invades our body, the body produces antibodies that recognise and fight the intruder. In specialised regions of the lymph nodes, so-called germinal centres, these antibodies are optimised with respect to the most specific immune response against pathogens, and the most suitable antibodies are selected. An international group of researchers that includes Michael Meyer-Hermann from the Helmholtz Centre for Infection Research and the Braunschweig Integrated Centre of Systems Biology recently discovered and simulated a mechanism in human germinal centres that is controlled by the neurotransmitter dopamine. They detected a promoting influence of the dopamine, as they found the formation of antibodies to take place earlier and to be more pronounced. It is a decisive advantage to have the antibody formation in human germinal centres in the course of immune reactions against rapidly proliferating pathogens be regulated by a neurotransmitter. Surprisingly, this newly discovered mechanism does not exist in mice. The study is published in Nature. 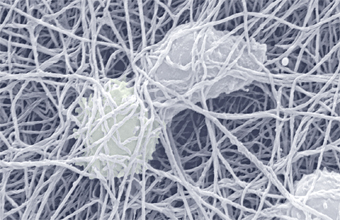 A B-cell binds an antigen-specific T-cell in order to present its antigen. © HZI/Manfred RohdeOnly because of its immune system, our body is capable of surviving in an environment full of pathogens. In addition to our innate immunity, we have an adaptive system that is formed only after birth in a fine-tuned interplay with our environment. In response to the ingress of a foreign substance into our body, specialised defence cells – B-lymphocytes, also called B-cells – produce antibody molecules. These antibodies recognise the invader by its structural features – i.e. the antigens – in an effort to control them. When a B-cell binds to an antigen by means of its receptor, the B-cell either produces a matching antibody directly or it gets involved in the formation of a germinal centre, in which these antibodies are developed further and are then mass-produced.

"Germinal centres are particularly interesting for infection research. They are basically the training facilities for antibodies," says Prof Michael Meyer-Hermann. "They develop in the course of an immune response in the lymph nodes into which various kinds of immune cells migrate.“ Meyer-Hermann heads the "Systems Immunology" department at the Braunschweig Integrated Centre of Systems Biology (BRICS), a joint research centre of the Helmholtz Centre for Infection Research (HZI) and the Technische Universität Braunschweig.

Inside the germinal centre, cooperation takes place between the B-cells and another type of immune cells, the so-called T-lymphocytes (or T-cells): "The activated B-cells proliferate and diversify their antibodies by way of mutation. The affinity of the antibodies for their antigens is increased by selection in interaction with the T-cells. Only the most effective ones remain. This evolutionary process is also called affinity maturation," says Meyer-Hermann. "The B-cell is the only cell known to date to actively mutate and, by doing so, to facilitate an evolutionary process inside an organism that is triggered by each vaccination."

While B-lymphocytes produce antibodies that are directed specifically against certain pathogens or harmful substances, T-cells recognise fragments of the antigen that were bound by and presented on the surface of B-cells. The focus of the researchers was on the close interaction of these T- and B-cells in the germinal centre. "When B-cells and T-cells get in contact to each other they form a structure called ‘immunological synapse’ where the membranes of the cells touch", says Meyer-Hermann, and "the analogy to the synapses between nerve cells has fascinated many researchers. Both synapses are all about the transmission of information." From earlier studies, it was known that there are molecules that have different functions in the brain and in the immune system. Dopamine is one of the major neurotransmitters in the central nervous system.

In the scope of a project partly funded by the Human Frontier Science Program (HFSP)*, Carola Vinuesa (Canberra, Australia), Michael Dustin (Oxford, UK) and Michael Meyer-Hermann (Braunschweig, Germany) in collaboration with Claudio Doglioni (Milan, Italy) investigated the influence of the neurotransmitter, dopamine, on the germinal centre reaction in human tonsils. They were able to show in their study that T-cells in human germinal centres release dopamine, which leads to a more rapid upregulation of the signals required for the selection of B-cells. The signal cascade induced by dopamine lasts only for 30 minutes in B-cells of human germinal centres. By comparison, the same signal cascade takes over four hours in mice that are lacking this dopamine-dependent signaling path. "Since it is not possible to study the impacts on humans, we investigated certain questions by way of computer simulations," says Meyer-Hermann. The aim of this study was to determine how the affinity maturation of B-cells in the germinal centre is changed by the additional dopamine-dependent signaling pathway.

For the simulation of a germinal centre reaction, Sebastian Binder and Philippe Robert from Meyer-Hermann’s team used a mathematical model that was validated by a large amount of experimental data. Germinal centres were simulated with and without the dopamine-dependent signaling pathway based on the available findings. "Much to our surprise, we found dopamine to have no influence on the affinity maturation. Our intuitive guess that antibodies would be produced earlier in time was confirmed though," says Meyer-Hermann. "The unexpected and most pronounced effect of the dopamine-controlled process was that a clearly increased amount of antibodies was produced." The result of the mathematical modelling of the researchers was that the more rapid signaling cascade in B-cells can accelerate the output of the germinal centre by 24 hours and can clearly increase the total amount of antibody produced.

"It is fascinating that the entire signaling pathway for control of the immune response by means of the dopamine neurotransmitter exists in humans, but not in mice," says Meyer-Hermann. This might be of interest not only for improvement of immune responses after vaccination in the elderly population. The use of a dopamine-dependent signaling pathway in the immunological synapse of T- and B-cells in lymph nodes might be an evolutionary advantage during an infection. This is equivalent to a survival advantage during an infection by rapidly developing viruses, toxins or other infectious substances that can be stopped by large quantities of highly selective antibodies. "For certain diseases, it is very important to have the antibodies available a little earlier and in larger amounts," says Meyer-Hermann. "Especially for Ebola patients, the production of antibodies at an earlier point in time is extremely relevant. It makes the difference between life and death of the patient."