The oral cavity germ Fusobacterium nucleatum is known to speed up the growth of human carcinomas, for example in the intestine or breast. In a joint study, the Helmholtz Institute for RNA-based Infection Research (HIRI), a site of the Helmholtz Centre for Infection Research (HZI), and the Julius Maximilians University (JMU) in Würzburg, Germany, have now mapped the RNA molecules of five clinically relevant strains of this adaptable bacterium. The findings could help develop new therapies for various cancers. The results of the research have been published in the journal Nature Microbiology. 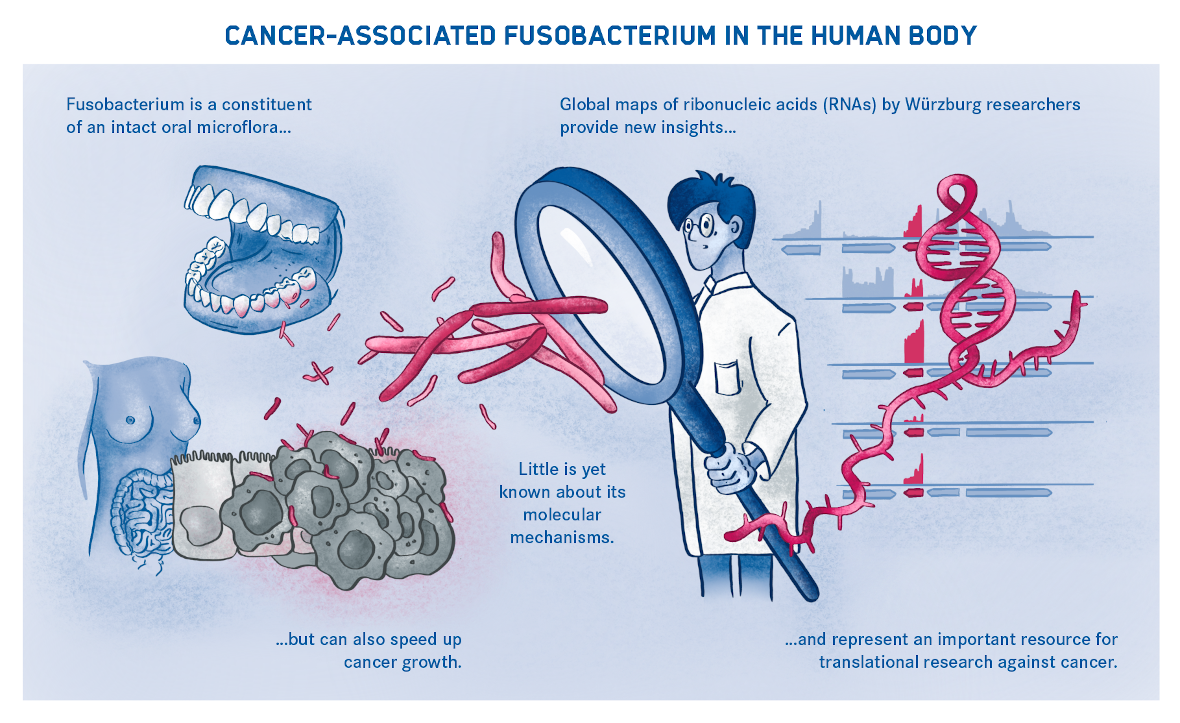 © HIRI/Sandy Westermann.Fusobacterium nucleatum is found in the human oral cavity and is an important component of an intact microflora in the mouth. However, it can also contribute to the development of periodontitis. And more importantly, the germ is also increasingly being found within the human body, namely on colon cancer cells and breast carcinomas. There, it appears to accelerate tumor growth and complicate treatment. Basic research to date has provided initial insights into the molecular response of host cells to the bacteria. However, the molecular mechanisms of the microbe itself, its activity in cancerous tissue and how it manages to colonise not only in the mouth but also in very different parts of the human body are still largely unknown.

Scientists from the Helmholtz Institute for RNA-based Infection Research (HIRI) in Würzburg, a location of the Helmholtz Centre for Infection Research in Braunschweig (HZI) and the Julius Maximilians University (JMU) in Würzburg, and from the Institute of Molecular Infection Biology (IMIB) at the JMU have now taken a decisive step forward in answering these questions. They have compiled a global atlas of RNAs, i.e. ribonucleic acids, for five clinically relevant strains of the germ. This allows them to detect hundreds of previously unknown processes in the gene regulation of the microorganisms and to show how these change during bacterial growth. The researchers have also used an overexpression vector as a genetic tool in Fusobacterium for the first time to study the functions of its genetic code.

"Our RNA-based approach opens up completely new avenues for analysing and better understanding a clinically highly relevant microorganism at the level of its molecular biology," says HIRI director Jörg Vogel. The professor and director of the IMIB initiated the current study and is confident that its findings will fuel further translational research aimed at medical applications.

The RNA mapping that has been carried out includes Fusobacterium nucleatum with its subspecies nucleatum, animalis, polymorphum and vincentii as well as Fusobacterium periodonticum. The scientists analysed the primary transcriptomes – the set of RNA molecules – of these strains. To study the functions of those genes, the team used an overexpression vector. This is a tool that can permanently "turn on" a particular gene in order to dissect its mode of action in detail.

By using the overexpression vector, the researchers discovered small regulatory RNAs, known as sRNAs, and were able to demonstrate for the first time that these also carry out a regulatory function in the microorganisms. An interesting fact, according to Falk Ponath, first author of the study: "Fusobacterium nucleatum diverged from other bacteria quite early in its evolutionary development. That is why we didn't assume from the outset that we'd discover sRNA that acts similarly to what is already known in other bacteria." Moreover, the team was able to verify that this small RNA regulates a protein of the outer cell membrane.

The studies also confirmed the germ's adaptability and could explain, at least in part, why it acts as a generalist, Ponath said. "The opportunistic success of Fusobacterium nucleatum in cancer tissue is probably due to the fact that those genes responsible for adhesion to tumor cells are always active," the scientist says.

The study, published in the journal Nature Microbiology, was funded by the Gottfried Wilhelm Leibniz Prize of the German Research Foundation, awarded to Jörg Vogel in 2017, and by the fellowship programme of the Vogel Foundation Dr. Eckernkamp. Its chairman Gunther Schunk, sponsor of Fellow Falk Ponath, emphasises the foundation's goal of supporting excellent scientific work: "HIRI is among the world leaders with its RNA-based infection research. With the current study results from our fellowship programme, which we initiated with the HIRI funding, we are jointly sending a strong signal in basic research and in the struggle against cancer," Schunk is pleased to say.

The mapping of the Fusobacterium transcriptomes represents an important prerequisite for the future treatment of cancer. On its basis, the next step could be to identify genes that can be targeted for treatment to eliminate Fusobacterium in carcinomas and control cancer growth.