Carolacton is a natural product with antibiotic properties that is produced by soil-dwelling microorganisms. Researchers of the Helmholtz Institute for Pharmaceutical Research Saarland (HIPS) and the Helmholtz Centre for Infection Research (HZI) recently discovered that the bacterial agent inhibits a key enzyme of the metabolism of folic acid. This metabolic pathway exists in most living organisms and is essential for the growth of the organism since it is involved in the production of DNA components. Since this applies to humans also, the use of carolacton as an antibiotic might be difficult. But this target enzyme is needed strongly by rapidly growing cancer cells, which means that the growth of these cells can be inhibited by carolacton. The new evidence shows that carolacton and agents derived from this substance may be used as inhibitors in future cancer therapies. The researchers recently published their results in Nature Communications. 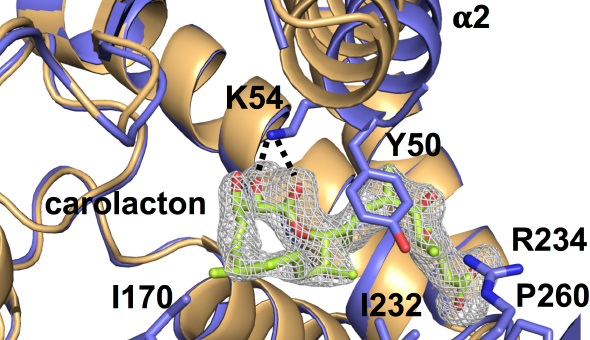 Complex of FolD and carolacton. Image: Fu et al., 2017Natural products have been a source of new drugs for thousands of years, but even if their use has a long-standing tradition, the exact mechanisms of their action is often unknown. The natural product carolacton belongs to the substance class of polyketides and has been isolated from Sorangium cellulosum, a soil-dwelling myxobacterium.

Carolacton can interfere with important processes in bacteria: for instance, it reduces the formation of a biofilm by Streptococcus mutans, the main cause of dental caries. But carolacton is also a growth inhibitor of Streptococcus pneumoniae, one of the most life-threatening microorganisms.

Aside from the antibiotic activities, especially the anti-biofilm activity of carolacton drew the interest of the researchers. They aimed to find out how this inhibition works and which mechanism is used. Recently, the HIPS researchers collaborated with Prof Irene Wagner-Döbler from the HZI to identify the molecular target - the target enzyme - of the agent in Escherichia coli and Streptococcus pneumoniae: Carolacton can bind highly specifically to FolD, the key enzyme of C1 metabolism ("C" meaning carbon) and, by doing so, switch off the enzyme. FolD is involved in the production of folic acid in C1 metabolism. The crystal structure and the binding properties of carolacton to FolD were elucidated in detail in collaboration with the "Structural Biology of Biosynthetic Enzymes" young investigator group of Dr Jesko Köhnke.

The new insights of the researchers from Saarbrücken and Braunschweig have far-reaching consequences. "C1 metabolism is one of the most important metabolic cycles and, as such, is highly conserved throughout all domains of life. It makes important components of growth available, including nucleic acids, amino acids and pro-vitamins," says Irene Wagner-Döbler. "Accordingly, we find the genes

for the key enzyme FolD to be conserved in many different species, and in the mitochondria of human cells. Due to the high degree of conservation that exists between the bacterial FolD enzyme and its equivalent in human mitochondria, especially at the carolacton binding sites, the natural product inhibits the mitochondrial enzyme as well. Consequently, the use of carolacton as an antibiotic in humans is basically inconceivable."

But a new option for the use of the natural product has just opened up. "This key enzyme is overproduced in many tumour cells. In initial experiments, we were able to show inhibitory effects in a number of cancer cell lines we tested," Rolf Müller says.

Carolacton would therefore be a good starting point for the use as an inhibitor in cancer therapy. But the pharmaceutical properties of the molecule still need to be optimised in the future.

This research was funded by the Federal Ministry for Education and Research in the scope of the ebio Systems Biology Program and was done, in part, at the German Center for Infection Research (DZIF).