Scientists from InSCREENeX GmbH and the Helmholtz Centre for Infection Research (HZI) have collaborated to develop a technology allowing cells from any tissue to be proliferated in a petri dish without losing the cells' tissue-specific properties. For example, this allows for newly discovered agents to be selectively tested in the cell culture and it provides the ability to examine organ-specific effects. In the meantime, the researchers have fine-tuned their process to the point where only a small number of cells is required as the starting material. Today, the Chamber of Industry and Commerce Braunschweig honoured this technology with the 2018 Technology Transfer Award. The award is endowed with 10,000 euros and goes to Dr Tobias May, Dr Roland Schucht and Dr Tom Wahlicht from InSCREENeX, as well as Prof Dagmar Wirth, who is the head of the "Model Systems for Infection and Immunity" research group at the HZI.

The adwardees (from left): Tobias May, Dagmar Wirth,Tom Wahlicht, Roland Schucht © IHK/Susanne HübnerBefore a newly detected agent, used to fight for example a bacterial or viral pathogen, can be approved for use as medication, it must pass various test studies: The first pre-clinical studies are done on cell cultures and animals, after which follow several clinical studies using humans. The time from the discovery of the agent to production of the actual medicine may take from ten to 15 years and cost from 100 million to over a billion euros. The vast majority of candidate agents fall to the side during the process, due to extreme side effects or an insufficient effect in humans. In order to filter out as many unsuitable candidates in the initial studies and selectively develop promising ones, scientists and pharmaceutical companies need endogenous cells, also known as primary cells. These originate directly from the organ or tissue that is to be studied. However, during conventional culturing cells often lose their tissue-specific properties, which is why primary cells are only available in very limited amounts. 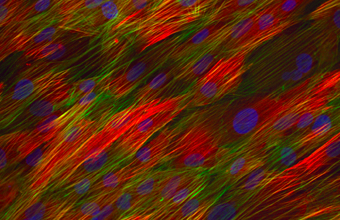 Smooth muscle cells (left) are all aligned in the same manner in the petri dish – just as in body tissue © HZI/Tobias MayAnother challenge for drug development is that often the final drug only helps some patients. In order to develop the best-possible candidate agents, test systems should ideally take human diversity as well as the disease into account. “Our goal was to find a method that allows to inexpensively and permanently cultivate and proliferate any cell without it losing its characteristic properties, and to be able to do that with any patient and in association with any disease. CI-SCREEN technology now lets us do that,” states Tobias May, who is the managing director of InSCREENeX, which developed the new technology in collaboration with the research group at HZI run by Dagmar Wirth. CI-SCREEN is based on a set of 33 different genes that are randomly introduced to the isolated body cells. In doing so, each cell receives a different gene combination. An optimum combination can be derived for every cell type from these 33 genes, which activates the cells to continually grow while maintaining their tissue-specific properties. “Our technology generates cellular systems from any tissue which then can be used to screen and test agents. What makes this so special is that personalised cellular systems are also possible, as you can use an extremely small number of cells from each donor,” says May. “This enables us to provide personalised medicine through the use of a completely novel tool.” 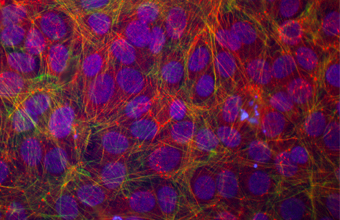 Neuronal cells illustrate varied interconnections among themselves. © HZI/Tobias MayThe Chamber of Industry and Commerce Braunschweig has now honoured the development of the CI-SCREEN technology with the 2018 Technology Transfer Award. The award was presented for the 34th time and honours successful projects that transfer knowledge from research institutes to industry. In doing so, the Chamber of Industry and Commerce hopes to foster cooperation between research and industry.

“We are very pleased that our long-term, fruitful and very successful collaboration with Dagmar Wirth from HZI has been honoured with this prestigious award,” adds Tobias May.

“The cooperation with InSCREENeX allows us to proliferate limited patient samples and use them to create meaningful test systems for our research activities,” says Dagmar Wirth. The scientists in Braunschweig also received the Otto von Guericke Award for their CI-SCREEN technology back in 2013.