A beneficial immune response must hold a balance between activation against pathogens and cancer versus suppression to avoid tissue damage. Deviation from this balance results in autoimmunity on one side versus cancer and chronic infections on the other side. Among numerous factors that control the immune balance, regulatory and conventional T cells and their interplay are central. While conventional T cells boost the immune response via the production of pro-inflammatory signals, regulatory T cells have the ability to suppress the immune response. We are interested in understanding the processes of thymic selection, peripheral homeostasis, and immune activation of T cells in the context of infection and autoimmunity.

During development, T cells express randomly generated T cell receptors that could potentially recognize any peptide, including self and foreign peptides. In order to select a functional and self-tolerant T cell repertoire, pre-mature T cells undergo a series of selection steps in the thymus, where various self-antigens are presented. We proposed an agent-based model of thymic selection that relies on signal integration of T cells from various interactions with antigen presenting cells. The success of the model in explaining how regulatory and conventional T cells are selected relies on taking into account the history of T cell receptor stimulations. In particular, we could understand with the model why regulatory T cells are more cross-reactive than conventional T cells. Subsequently, the model was used for predictions of how the selected repertoires are changed by manipulations in the thymus. The results help in better understanding tolerance induction and autoimmunity in peripheral T cell repertoires and may suggest strategies of inducing or breaking immune tolerance.

How are regulatory T cells maintained in the immune system?

We demonstrated with a population dynamics model that thymic output and T cell division alone are not able to explain the fast rebound or regulatory T cells. Conversion turned out to act as a trigger of the rebound by re-installing a baseline population, which then divides to rebuild the regulatory compartment. The model predicts that regulatory T cells control T cell transorgan migration. Currently, we investigate the dynamics of T cell subsets under disease conditions. 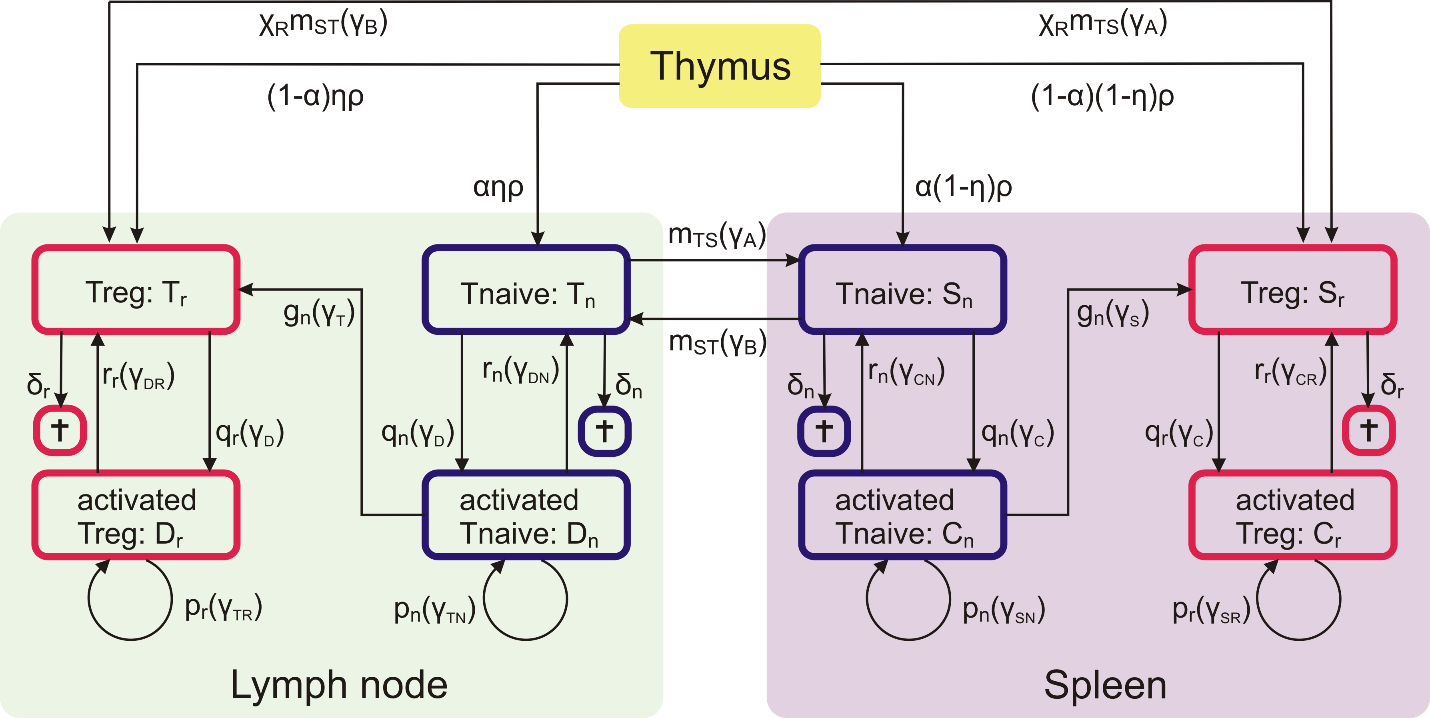 Triggering of T cell receptors induces a nonlinear calcium response necessary for T cell-activation. The contribution of various trans-membrane ion currents and of intracellular organelles to the calcium signal is controversial. We developed an ordinary-differential-equation model for T cell calcium electrophysiology based on measured single trans-membrane protein properties. This reduces the number of tunable parameters and increases predictive power.

In cooperation with Andreas Guse and Ralf Fliegert (Hamburg, Germany) the model was validated with experimental data for calcium dynamics under different conditions. The model proposed that Calcium Release-Activated Channels rather than inducing an early calcium increase supports a long-term sustained calcium enhancement. Currently, we extend this model with the aim to understand pharmacological interventions that target ion-conducting trans-membrane molecules, in particular in the context of transplantation and graft rejection.

A quantitative concept of self-nonself distinction

A parametric bifurcation analysis revealed on purely analytical grounds that the relative population of conventional and regulatory T cells as well as their absolute numbers are the major determinants for immune activation. This applies to self and foreign antigens, which are not distinguished in the model. On the contrary, our study suggests that structural differences are not required for self/nonself discrimination. The model helps in understanding the nonlinear dynamics of the immune response and emergence of chronic infections and inflammageing.