Many viral infections are associated with secondary diseases like cancer, metabolic dysfunctions or autoimmunity. Understanding such seemingly unrelated correlations requires investigation of the immune system in the context of other systems like the endocrine and the nervous system. There is increasing knowledge about the connections of these subsystems.

We aim at describing infection-associated diseases with mathematical models with particular emphasis on the neuro-endocrine-immune-system interactions. Our working hypothesis is that pre-existing treatment strategies ignore the impact of other subsystems in the organism and, therefore, might be suboptimal. We use mathematical models to propose optimized treatment protocols.

Optimising cortisol therapy with a clock

On the other hand, these interactions enable the neuroendocrine system to react to immune stimuli such as infections and inflammation. Understanding the dynamics of the coupled systems has helped to elucidate the role of circadian patterns in the context of rheumatoid arthritis: Starting from the particular circadian variations of inflammatory signals we predicted that the effect of cortisol on inflammation would become three-fold when given at midnight instead of in the morning. This prediction was confirmed and meanwhile entered clinical practice.

Fundamental insights into the individual cellular behaviour in cancer and the corresponding emergent properties of tumours are important for the improvement of therapeutic approaches. As cancerous tumours develop from single malignant cells into macroscopic objects of millions of cells we study their development and response based on models on the scale of individual cells. Agent-based simulations of tumour development and organization were used to optimize pre-existing cancer therapies. In all cases, the effect of the respective drug is supported by the activity of the immune system.

For cancer irradiation different fractionations and doses were tested in silico in order to take advantage of cell cycle synchronization induced by a single dose. As the vulnerability of cells for radiation depends on the cell cycle phase, the protocol of dose deposition was chosen to hit the synchronized cells in the moment of their highest sensitivity (collaboration with Haralampos Hatzikirou (Dresden, Germany) and Marcus Bleicher (FIAS Frankfurt, Germany)).

Ovarian carcinoma are treated by chemotherapy with carboplatin combined with the small molecule ABT-737. With a mathematical model, the synergistic effects of both therapies were explored and the best sequence and dosage was determined (collaboration with Harsh Jain (Florida USA) and Helen Byrne (Oxford UK)).

Cetuximab and trastuzumab are applied in stomach cancer. Together with Birgit Luber (München, Germany) and Fabian Theis (München, Germany) data on single cell motility of different cell lines and under conditions of different drug treatments are collected. We aim to minimise the cancer metastasis probability with therapies targeting cell motility. With the help of mathematical models the impact of changed cell motility parameters on the tumour fate will be predicted and validated by further experiments.

The activation of the innate immune system and chronic low-grade inflammation are closely associated with the pathogenesis of type 2 diabetes. Clinical trials based on anti-inflammation drugs are in progress with inconsistent results. Mathematical models, integrating and describing accurately information from different aspects, can help to understand the mechanisms and predict possible outcomes of specific treatments. IL-1beta is an interesting molecule in this context, because, on the one hand, it is a pro-inflammatory molecule, and, on the other hand, it is produced by pancreatic betacells and influences their activity. This gives rise to an interesting interaction between inflammation and insulin secretion.

Together with Kathrin Maedler (Bremen, Germany) and Michele Solimena (Dresden, Germany) we developed a mathematical model of IL-1beta dynamics in order to understand the onset of type 2 diabetes. The model solutions showed a structure well corresponding to the stages seen in type 2 diabetes development. The model suggested that only a treatment combining glucose control with transient anti-inflammatory drugs would provide a long-term control of type 2 diabetes. Together with Carlos Guzman (HZI) and Ingo Schmitz (Magdeburg, Germany) we currently focus on liver insulin resistance in the context of pulsatile insulin and inflammatory signals. This may contribute to a model including glucose, fatty acid and inflammation as key players in the development of type 2 diabetes. 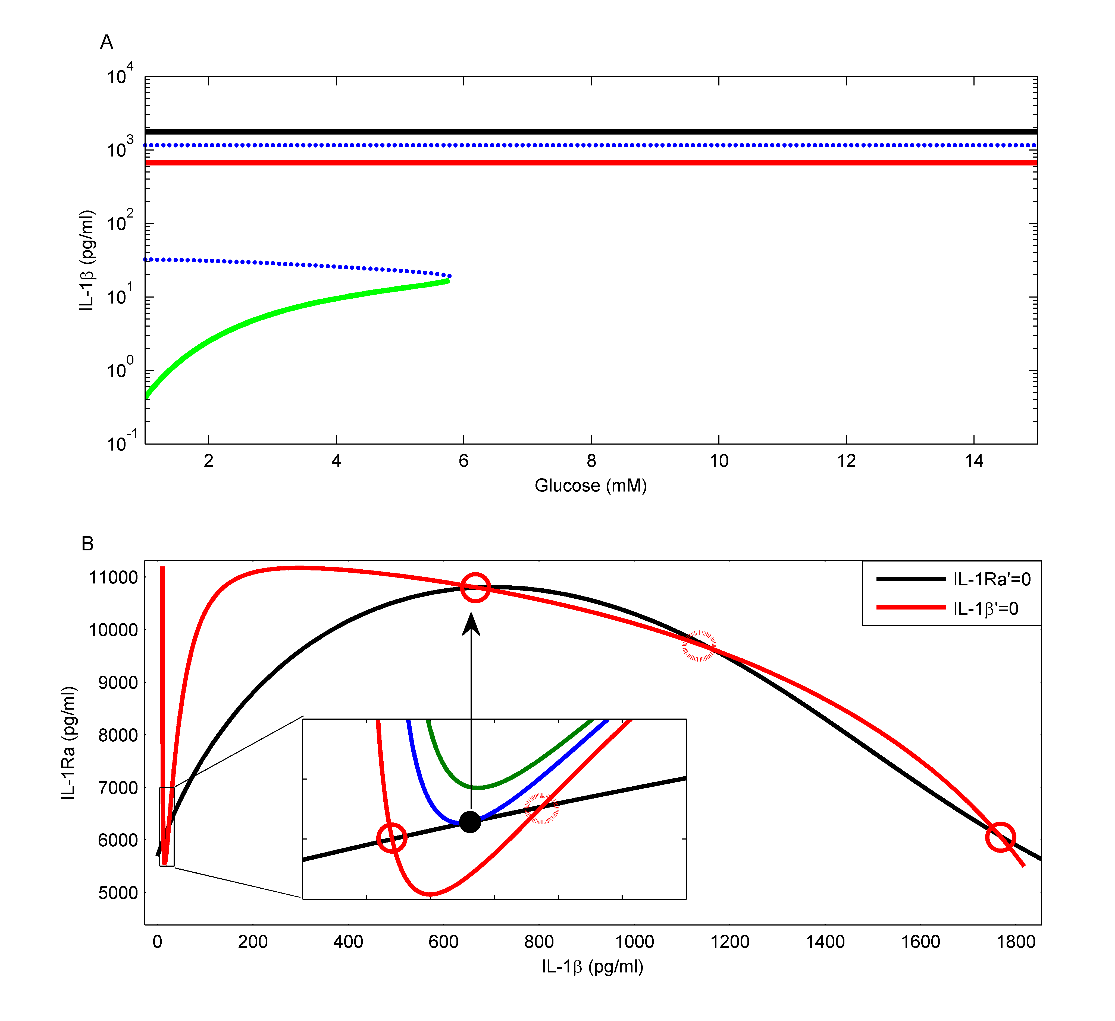