Among bacterial diseases, some infections are difficult to treat and pose a significant threat to patients despite the availability of modern antibiotics. Antibiotic resistance is a major problem in public health. Factors that promote resistance are not well understood and include genetic modification of bacteria, epigenetic changes of signaling, as well as inter-cellular communication. There is increasing evidence that, in addition to the genetics of the bacteria, the communication between bacteria and their biophysical interaction properties are important for their sensitivity to antibiotics. With the help of mathematical models, we aim at identifying mechanisms of bacterial immune evasion and protection against antibiotics.

Pseudomonas aeruginosa (PA) is a bacterium causing diseases in animal and human. It usually colonizes immune-compromised patients (e.g. under conditions of cystic fibrosis, cancer, or AIDS). PA show a very flexible adaptation pattern to changed environmental factors and there exists a correlation of antibiotic resistance and the formation of biofilms. We are interested in the mechanisms of adaptation on the level of transcription and cellular biophysics.

Depending on external conditions, PA forms biofilms of different morphologies and develops antibiotic resistance. In cooperation with the group of Susanne Häußler (HZI, Twincore Hannover, Germany), we employ computer models to investigate mechanisms of biofilm formation, which eventually leads to a fatal spreading of PA infections. A particular emphasis is set on the biophysical properties of PA in terms of bacterial motility, chemotaxis, nutrient dependence, and mechanical inter-cellular interactions. Our aim is to find the critical parameters or processes, which would be suitable targets for in vivo prevention of the spread of PA infection.

Transcriptional regulation is a fundamental biological process that allows organisms to react to changes in its environment. In bacteria, transcription is regulated by a set of master regulators called sigma factors. These sigma factors are components of the RNA polymerase holoenzyme that enable binding to the promoters of a specific set of genes, referred to as “regulon”. Alternative sigma factors exist that become active under specific environmental conditions, providing a modular structure in transcriptional regulation.

In cooperation with Susanne Häußler (HZI, Twincore Hannover, Germany), we currently investigate the transcriptional profile of PA to understand the role of this modularity for the evolution of new functionality in transcriptional regulation and evolutionary advantages that the modular structure may offer.

Borreliosis burgdorferi belongs to the class of spirochetes and is transmitted by tick bites. Besides many other remarkable properties that make the treatment of this bacterium difficult, its high infectivity is striking. The bacterium induces a strong immune reaction that effectively kills the bacterium in vitro. However, the bacterium evades the immune response in vivo and infections persist for a long time despite immune cells infiltrating the infection site in large numbers.

Our aim is to disentangle the interactions between the immune system and the bacterium in order to propose optimizations for treatment of and vaccination against the disease. The newly developed multi-organ model suggests that the bacteria mutate and immune resistant clones evolve in a competitive process. The immune system does not detect the resistant clones and infers the long-term persistence of the bacterium in the organism.

Currently, we investigate the structure of the long-term coexistence of the resistant clone and the immune system and principles of disease outbreaks. 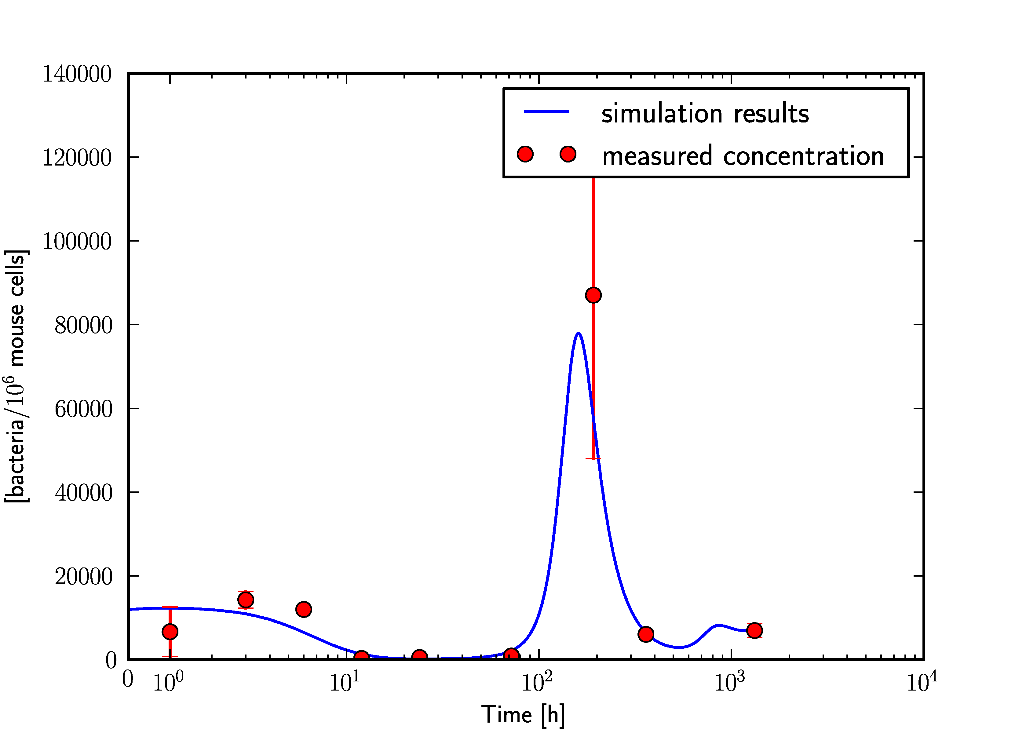 Interaction of microbiota and immune system

In recent years, an increasing number of diseases was identified that can be prevented by modifications of the gut microbiota. This applies in particular to autoimmune diseases. The immune system contributes to the microbiota by generation of specific IgA antibodies. In cooperation with Sidonia Fagarason (Riken, Japan) and Oliver Pabst (Aachen, Germany) we are investigating the interaction of microbiota and the immune system with mathematical models.