Adaptive immune responses to pathogenic challenges can be subdivided into cellular and humoral immunity. The latter is associated with the production of specific antibodies that support and guide the immune response by opsonation of the antigen and by signalling to other immune effectors. High affinity antibodies are generated in lymphoid organs in a unique evolutionary process of B lymphocytes denoted as germinal centre reaction. B cells diversify and optimise their encoded antibody by division, mutation, competitive selection, and generation of high affinity antibodies for efficient elimination of a particular pathogen.

However, the induction of humoral immune responses is not only beneficial but is also associated with autoimmunity (rheumatoid arthritis, multiple sclerosis, etc.) and graft rejection after transplantation. We want to understand the mechanisms of germinal centre induction, B cell selection and differentiation, and germinal centre shutdown.

Selected germinal centre B cells recycle to a re-dividing phenotype

During a germinal centre reaction B cells divide and mutate their encoded B cell receptor. Subsequently, B cells are selected based on the affinity of the receptor to the antigen that initiated the response. It was hypothesised by theoretical predictions from the Perelson group (Los Alamos, USA) in 1993 that B cells have to undergo several rounds of mutation and selection in order to identify high-affinity clones, which was further on associated with the term “recycling of B cells”.

In cooperation with Andreas Deutsch (Dresden, Germany), we have predicted with a mathematical model that recycling is the dominant fate of selected B cells. Only in 2010 a direct proof of the recycling of B cells was provided by photoactivation experiments of Gabrial Victora (Cambridge, USA). This result is an example of how theoretical concepts can shape experimental research and is critical for understanding the evolutionary process of generation of high-affinity antibodies.

In cooperation with Marc-Thilo Figge (Jena, Germany) and the groups of Marie Kosco-Vilbois (Geneva, Switzerland), Matthias Gunzer (Essen, Germany) and Kai Toellner (Birmingham, UK) we showed with spatial mathematical models of cell motility, that B cells only transiently acquire sensitivity for chemokines and do random walk most of the time. This transient chemotaxis model solved the contradiction between the observed trans-zone migration of B cells and the measured random walk.

Antigen are fragments of a pathogenic molecule, which initiate the germinal centre B cell response and are presented on follicular dendritic cells. B cells need to bind antigen for survival and the predominant model was that the amount of antigen is the limiting factor of B cell selection.

In a cooperation with Philip K Maini (Oxford, UK) and Dagmar Iber (Basel, Switzerland), using agent-based spatio-temporal mathematical models, we have predicted that among many possible selection mechanisms, limiting antigen is the least efficient. Instead we proposed a new mechanism according to which high-affinity B cells collect antigen more efficiently than low-affinity ones. This leads to more processed antigen and a higher density of peptide-MHC presented on the B cells. The subsequent interaction with follicular helper T cells would be the limiting factor of B cell selection, in which the B cells with highest density of peptide-MHC are more likely to get survival and division signals.

This prediction got strong support in the subsequent years with the help of photoactivation experiments and changed the paradigm of how B cells are selected in germinal centres.

Ways to optimise quality and quantity of antibodies

The goal of a germinal centre reaction is the formation of plasma cells, which generate large amounts of high affinity antibodies. At each selection step the fate of the selected B cell is either recycling or differentiation to an output cell. Our mathematical models show that increasing the recycling probability, in contrast to intuition, increases the number of generated output cells.

In cooperation with Michael Dustin (Oxford, UK), we found that in a model with limiting T cell help this leads to a 10-fold higher overall production of output cells, thus, providing a strong evolutionary advantage. There is no experimental support for this theory yet. However, if true, it opens a new line of treatment targets with the aim of controlling the strength of humoral immune responses. Building on these results we have searched for a possibility to increase both the quantity and the quality (in terms of B cell receptor affinity to the antigen) of germinal centre derived plasma cells. We have identified only one mechanisms: Dynamic and affinity-dependent number of divisions induced in positively selected B cells.

Do  germinal centres interact via their produced antibodies?

Antibodies generated by the germinal centre output cells dilute over the whole organism. In particular, these antibodies may re-enter germinal centres and eventually influence the affinity maturation process.

In cooperation with the group of Kai Toellner (Birmingham, UK), we investigated this question in a combined experimental and theoretical approach and found that antibodies re-enter germinal centres in an affinity-dependent manner and that produced antibodies compete with germinal centre B cells for binding antigen.

Mathematical models showed that this competition accelerates affinity maturation by about 24 hours. The main impact seemed to be the initiation of the shutdown of the germinal centre reaction. A natural implication is that germinal centres may interact via their products. We want to understand whether this interaction leads to a synchronisation or an inhibition of germinal centres. This is of particular importance for the elderly population with frequent chronic inflammatory states. 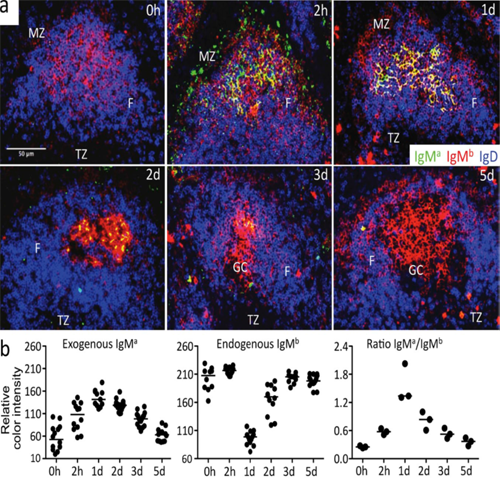 The initiation of germinal centre reactions relies on B cells, having seen the native pathogen, and on interaction of B and T cells at the follicular border. However, in cooperation with the groups of Marie Kosco-Vilbois (Geneva, Switzerland) and Kai Toellner (Birmingham, UK), we have shown that factors associated with innate immunity are also critical for germinal centre formation. Toll-like-receptor 4 was required for the proper formation of the follicular dendritic cell network in B cell follicles and, thus, instrumental for B cell mutation and maturation. This finding contributes to medical research on poor immune responses, e.g. after vaccination of the elderly population.

What  controls the initiation of tertiary lymphoid tissue?

Tertiary lymphoid tissue are lymphoid structures that emerge at ectopic places, which normally do not contain lymphoid structures like synovial tissue in rheumatoid arthritis or transplanted organs. Building on our model for the formation of secondary (i.e. normal) lymphoid tissue, we investigate in cooperation with the group of Friedrich Feuerhake (Hannover, Germany) conditions for the formation of tertiary lymphoid tissue in the context of renal transplantations. The goal is to determine early signatures of a rejection of the transplant for use in clinical practice.